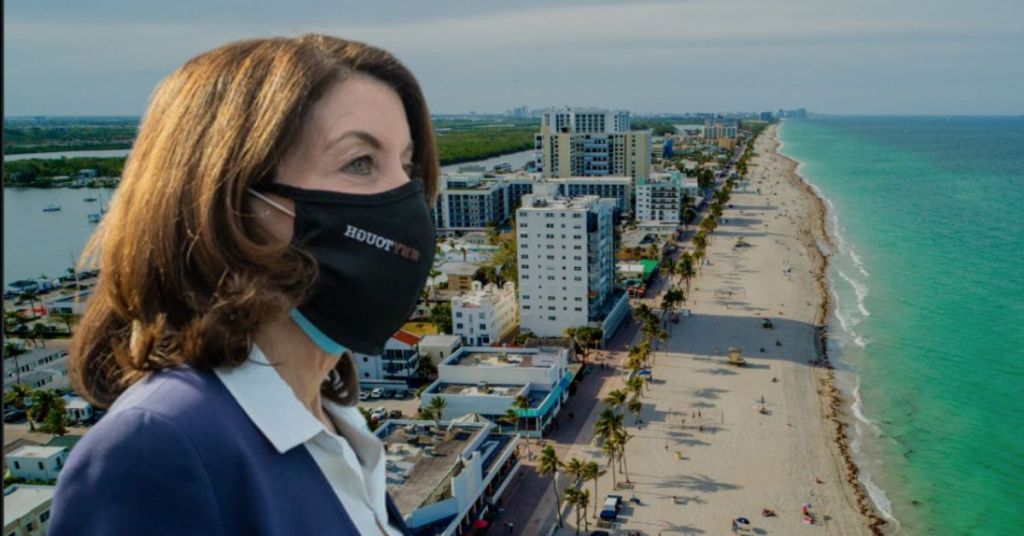 Hochul stated, "I just want to say to the 1.77 million Jews who call New York home: Thank you for calling New York home. Don’t go anywhere or to another state. Florida is overrated. I shouldn’t say this but look at the governor. It starts at the top down."

She then added, "Getting in trouble, gotta stay on script," before introducing Holocaust survivor Celia Kener at the Museum of Jewish Heritage.

The Jewish advocacy group Tikvah organized a May exhibit at the same museum by DeSantis. The museum canceled the event due to protests over the governor's conservative record and denied that DeSantis had been virtually banned from the property.

Brooklyn Councilwoman Inna Vernikov condemned the museum and Hochul on Friday, accusing both of having a double standard on who gets to speak at the location which hosted Democrats but banned Republicans.

Vernikov, a Ukraine-born Jew, asked in a tweet, "A few months ago, @MJHnews refused to rent space for a conf. Featuring @RonDeSantisFL to avoid being political. Yesterday, just a little over 2 months before her gubernatorial election, the museum had @GovKathyHochul sign a bill. Will they let me host her (R) opponent @leezeldin?"

Hochul's inappropriate partisan attack against DeSantis comes after hundreds of thousands of New Yorkers, including many Jews, have moved out of the state, with many choosing to resettle in Florida. Many cited the reason for moving as the strict Covid protocols in New York established by disgraced former Governor Andrew Cuomo and continued when Hochul assumed the position after his resignation.

During the bill signing, Hochul talked about the anti-hate measures included in the legislation that required the state Education Department to analyze how well schools are teaching students about the Nazi genocide of six million Jews in Europe during World War II.

Hochul mentioned statistics regarding the hundreds of antisemitic attacks in New York in 2022 and told reporters, "The lessons of the Holocaust need to be front and center in our minds today, as we see hatred rising up to the surface, unfettered in ways we’ve not seen before in my lifetime."

Nevertheless, many have cited New York’s bail reform legislation as one of the reasons the attacks against Jews have continued to soar. On Monday, Hochul continued accusing judges for criminals being released and claimed her administration is gathering data to prove that bail reform laws don’t need to be changed any further.

Since the bail reform was enacted, antisemitic attacks have rocked the state with some of the offenders in violent crimes being released almost immediately after they were arrested.