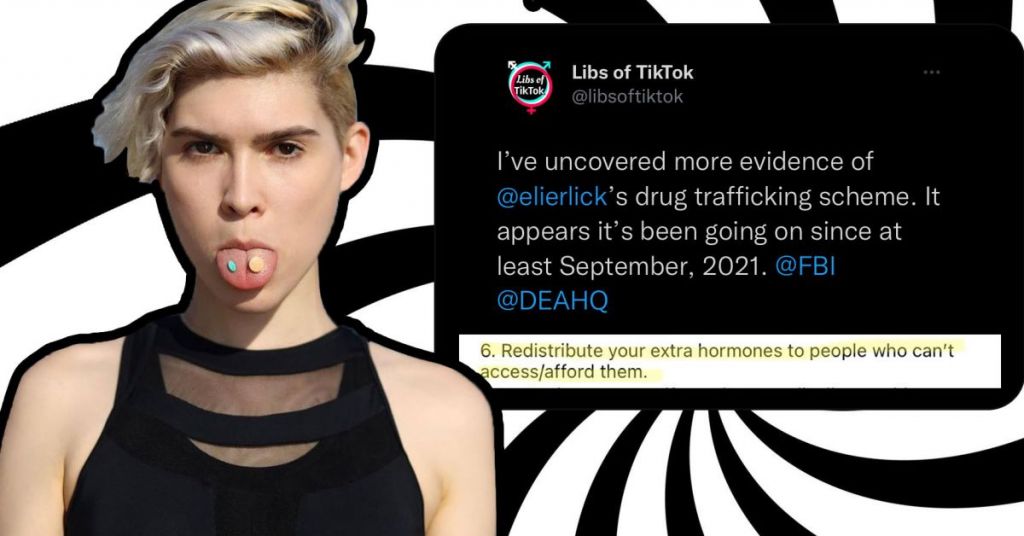 "It appears it’s been going on since at least September, 2021," announced Libs of TikTok, sharing a screenshot from Erlick’s Instagram page that showed his blatant disregard for the law. Number 6 on a list of 11 "mantras" Erlick wrote was to "Redistribute your extra hormones to people who can’t access/afford them."

On Saturday, Libs of TikTok shared an Instagram post from the trans-identified biological male from May that publicly detailed his scheme to send prescription hormones to "trans youth" through a distribution network.

The viral post caught the attention of the Daily Wire's Matt Walsh, who announced he would make it his "personal mission" to see Erlick face consequences for his confessed crimes. In response, Erlick tagged Walsh and Libs of Tiktok in an Instagram story that bragged, "Thanks for the free advertising."

Blaire White, a popular Youtuber, announced that she was making a video about Erlick and had contacted him for a quote. She shared a screenshot of their brief exchange. "Trans youth deserve lifesaving, affirmative care. You can quote me on that," announced Erlick, referencing the affirm-or-suicide myth that has been thoroughly debunked by specialists. "And you’re going to make one suburb prison bitch. Quote me on that," White retorted.

Matt Walsh appeared to reaffirm the promise he had made on Saturday to see Erlick charged with federal drug trafficking crimes. "We’re not going to let it go," he announced on Sunday.

Additional video evidence has emerged from Erlick’s YouTube Channel, of Erlick himself confessing his crimes, "Every month for the past several years, I’ve ordered a double dose of hormones and testosterone blockers. I save all the extra pills for my best friends, my closest lovers, and my worst enemies. I just hope these little pills can bring some joy into their lives."

Two years following his surgery, Erlick wrote on his Tumblr blog, “I feel as though getting surgery was not my own choice, but rather coercion … I still bought into the stigma that I wouldn’t have ‘truly’ been a trans woman had I not sought out the ‘correct’ medicine.”

United States Federal law 21 U.S.C. 841 makes it a felony to manufacture, distribute, or possess controlled substances with the intention to distribute without a legitimate medical purpose. Testosterone is a Schedule III controlled substance that is more strictly regulated than different prescription drugs for its dangerous side effects.

Libs of TikTok and Walsh have requested their followers to report the illegal drug scheme to the US Drug Enforcement Administration.