Double Jeopardy: Biden's DOJ Is About To Do Hunter A Huge Favor By Making A 'Sweetheart Deal' With Him 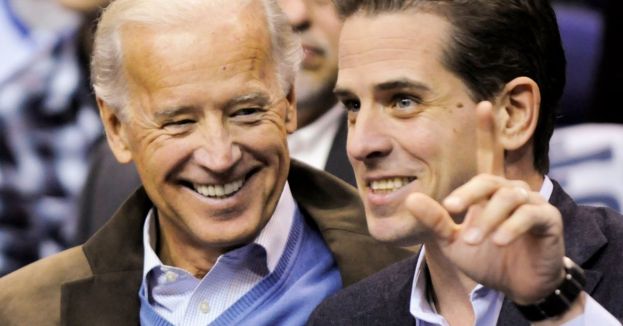 According to a new report, the federal investigation into Hunter Biden “appears to be coming to a head,” and it is not the deal Hunter deserves based on the obvious crimes he has committed. In fact, this could prevent the DOJ from coming after him under the rules of double jeopardy while he gets a slap on the wrist and pays a small fine. Thank you, 'Big Guy'.

The price of selling out your country to make millions is apparently, under $100,000.00 - and the penalty for using your father's famous name to do business with the world's shadiest characters is a wag of the finger and tsk tsk.

Forget the perverted images and possible sex offenses that are on his laptop; forget the sick and demented images of Hunter getting high and talking about 'The Big Guy' and the kickback he gets from the deals with the Chinese and Ukrainians. Hunter Biden will walk away Scott-Free, and no one will be able to prosecute him because his daddy's DOJ will strike a sweetheart deal with him to protect him - while spinning it as justice served.

The Justice Department is expected to make an ultimate decision on whether to bring criminal or civil charges or attempt to reach a settlement that could include a “significant fine,” in the following months, announced the report, which noted that allies of the President prefer a settlement if prosecutors want to press charges against his 52-year-old son. Whatever the choice is, Attorney General Merrick Garland will have the final say.

The Washington Examiner reached out to the Justice Department for comment on the report. The New York Times announced multiple efforts to reach Biden through his lawyer were unsuccessful. Much of the rest of the report focused on Kevin Morris, a prominent Hollywood attorney. He lent more than $2 million to Biden to pay back taxes and back his family and Morris’s donations to the legal and media strategy.

Biden’s financial affairs, including millions of dollars worth of dealings and money transfers tied to nations like Ukraine, China, and Russia, have been under federal scrutiny since 2018. According to the report, some of the files associated with a laptop believed to have belonged to Biden are being scrutinized for “possible violations of tax, money laundering and foreign-lobbying laws,”.

Biden, who showed the existence of an inquiry into his tax affairs only after the 2020 election, insisted in April of last year to be “100% certain” he would be cleared of wrongdoing.

A grand jury in Wilmington, Delaware, has been gathering proof in recent months. A witness was even requested to identify the infamous “big guy” mentioned in discussions regarding a Chinese business deal involving Biden, the New York Post reported in early April.

BUT, WHY? 29-YEAR-OLD NEW JERSEY WOMAN ARRESTED FOR USING FAKE DOCS TO REGISTER FOR HIGH SCHOOL

The question came up after this person, who was not identified, was shown a piece of evidence before the grand jury, a source told the news outlet. The answer was not reported, though some have argued the “big guy” is President Joe Biden, raising the possibility that the commander in chief could be pulled into a federal criminal investigation. Thus far, the White House has been adamant in asserting that the President is not involved and that Hunter Biden did not commit any crimes.

Republicans are eager to begin their probes into the Hunter Biden matter if they win control of one or both chambers of Congress in this year’s midterm elections.