California Governor Gavin Newsom Blasts Second Amendment All While THIS Is Happening Next To Him... 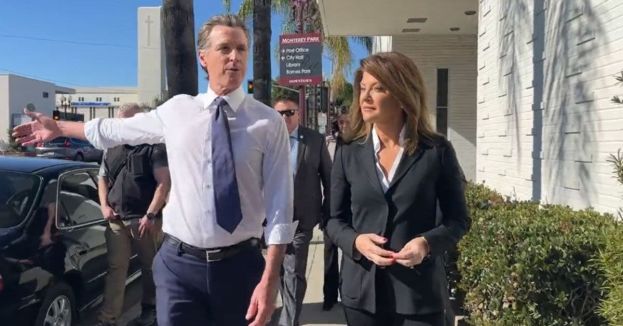 California Governor Gavin Newsom recently caused quite a stir when he declared the Second Amendment a “suicide pact” while appearing at a press conference that was heavily guarded by armed law enforcement. It was a scene that many called hypocritical and a prime example of the left-wing double standard on gun control.

The press conference was held in Monterey Park in response to a recent shooting that had taken place in the area. Newsom, who was visibly guarded by armed law enforcement, was asked about his stance on gun control. In response, the governor proclaimed that the Second Amendment was a “suicide pact” and went on to explain his support for stricter gun control measures.

This statement was met with swift criticism from Second Amendment advocates, who quickly pointed out the hypocrisy of Newsom’s statement. After all, here was a man who had surrounded himself with many armed guards yet was calling for an end to gun ownership.

Not only did this scene highlight the left-wing double standard on gun control, but it also drew attention to the fact that the Second Amendment is not only a right but also a responsibility. The Second Amendment is meant to protect citizens from government tyranny, not to give them a license to commit violence.

This was certainly not the first time that Governor Newsom had made a statement that was seen as hypocritical by Second Amendment advocates. In 2019, he declared a “State of Emergency” in response to a series of mass shootings, yet he has been a vocal supporter of gun control measures that would restrict the rights of law-abiding citizens.

It is unclear what will come of Governor Newsom’s recent statement, but it has certainly reignited the debate on gun control in California. What is clear is that the left-wing double standard on gun control needs to end. No one should be allowed to condemn a right while simultaneously benefiting from it.

Some of the most outspoken critics of Governor Newsom’s statement have been members of the California Republican Party. These critics have argued that Newsom’s statement is an example of the left wing’s desire to take away the rights of law-abiding citizens while allowing criminals to remain armed.

In addition to this criticism, gun control activists have also pointed out that Newsom’s statement fails to acknowledge the importance of gun safety and responsibility. Gun ownership is not just a right and a responsibility; it is also a privilege. Responsible gun owners understand that they have to be diligent in ensuring that their firearms are stored safely and do not fall into the wrong hands.