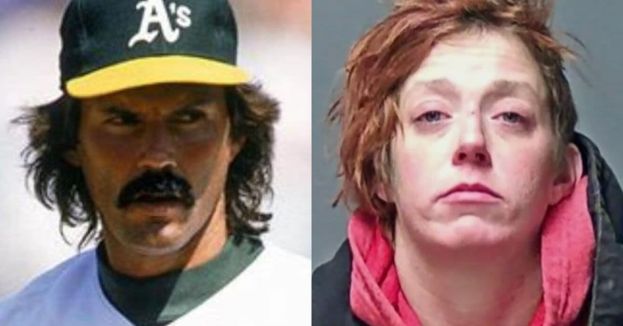 Baseball Hall-of-Famer Dennis Eckersley has an adopted daughter by the name of Alexandra Eckersley.

She was arrested on Monday after allegedly giving birth to a newborn and abandoning that child in a homeless camp in cold temperatures. The Daily Wire reports that Alexandra is 26 years old and is homeless.

Patch.com reports that Alexandra was charged with second-degree assault/extreme indifference and falsifying physical evidence charges, as well as misdemeanor counts of reckless conduct and endangering the welfare of a child.

Police records show that Alexandra Eckersley called 911 near midnight on Monday and told the dispatcher that she had given birth in the woods near Manchester, New Hampshire. When police and first responders arrived on the scene, they found Eckersley intoxicated.

“Based on [the officer’s] interaction with Eckersely, he believed [she] was under the influence of drugs.”

“He stated that at times, Eckersley was unsteady on her feet and that she would thrash around, side to side.”

Allegedly, she told police that she didn’t know where the baby was that she had just abandoned. This sent police searching the nearby woods as quickly as possible to find where the child was left. Police brought in K-9 units and other resources, expecting to find the body of the newborn somewhere in the woods. However, Eckersley allegedly told police where she had been staying in a tent in the woods and that the newborn would be found there.

Patch.com reports that Eckersley led authorities to the tent where she was staying, and they found the newborn still alive on blood-soaked towels.

“While on the scene at the campsite, Alexandra allegedly played music from her phone and sang along.”

The police report states that Eckersley reported that she supposedly tried to call 911 when she first learned of what was happening with the birth of her child. However, she said that she feared that police would seize her tent. The nearby hospital reported that the baby weighed 4.4 pounds and was born about three months prematurely.

The police report notes that law enforcement officers asked Eckersley why she abandoned the baby, and she allegedly stated: “What do they tell you when a plane goes down? Save yourself first.”

The case is still under investigation, and all suspects are presumed innocent until proven guilty in a court of law. However, this case has quite a bit of damning evidence.