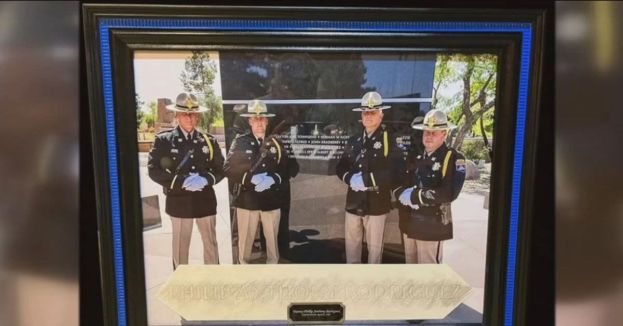 There is nothing that describes the pain of losing a loved one.

Time passes on, but the memory remains. But when the person is someone not only close to the heart but also the community, the loss is even more significant.

Deputy Philip A. Rodriguez lost his life while on duty in 2007. He served the Mohave County Sheriff’s Office in Arizona. The officer was just 21 when he was killed in a rollover accident. He was thrown from his car and passed away at the accident scene.

Officer Rodriquez was set to be married, so his loss was felt abroad. But his memory is even more profound as the holiday season continues.

According to the department’s website, the Western Journal reported that “The Arizona DPS arranged to have the deputy’s name engraved on the Arizona Peace Officers Memorial at Wesley Bolin Memorial Plaza in front of the State Capitol complex in Phoenix.”

The father of the fallen called the DPS and arranged to have the officer’s photo sent to the memorial. The photo was being sent from Idaho, where the father resided. But a mere picture of the memorial was not enough. The department wanted to reach out and connect with the family.

The Western Journal stated that “On Oct. 19, the deputy’s father received a visit from members of the Idaho State Police Honor Guard, who formally presented him with a beautifully framed large photo as well as an inscription rubbing of Rodriguez’s name on the memorial.”

Law enforcement officers are all part of a more prominent family. Those who have lost their lives in the line of duty often leave family members who need support. The department the officer worked for went out of their way to connect with the fallen officer’s father and made his memory special.