This Is Getting VERY Bad: Brazilian Military Is Being Deployed To Fight Commandos 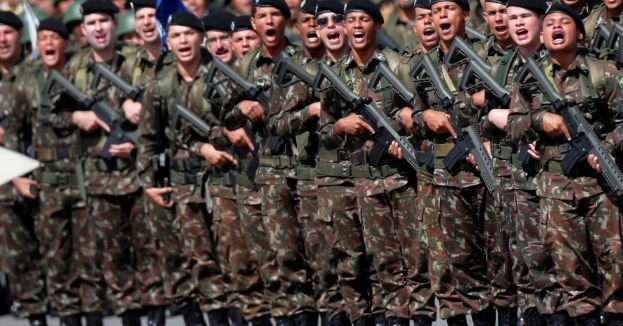 The Gateway Pundit reports that the Supreme Court of Brazil has moved up the certification of the election results once again.

They have now announced convicted Communist criminal Lula da Silva as the election winner. Initially, they were set to confirm the election results on December 19th, but they have pushed it up to now.

The court has taken this action due to growing unrest in the country. They appear concerned that a military coup could be about to happen in Brazil, and they want to beat people to the punch on that.

Matt Tyrmand spoke to Steve Bannon on the War Room podcast and stated:

“military (is) being strategically deployed, reservists are being activated.”

“The military is already active in the favelas, in the places where Lula’s base is strongest, criminals and drug traffickers. Remember election night, when he ‘won’, you could hear the cheers from the prisons… There are rumors Venezuela has shipped in paramilitary operators into the favelas, so they’ll come down from the hills should this go kinetic and engage with the military.”

The military is allegedly taking steps to get ahead of the situation. There have allegedly been firefights between members of the military and Marxist paramilitary groups.

The next step in the process might be to get a document that gives them reasons to take action to try to restore Bolsonaro as President of Brazil.

Tyrmand said the following about the event:

“(This is the) calm before the storm. The military isn’t talking to any of the good journalists that have good relations with them. It feels like something is afoot. Something’s going on. Fingers crossed.”

Allegedly, the military asks citizens to get involved in the movement and help them stop stealing the election. Many members of the Brazilian armed forces believe that the last election was stolen for Lula. Thus, some of them feel they have no other option but to take to the streets and commit acts of violence that they hope will restore Bolsonoro to power. It is still unclear what will happen at this time, but the military is gearing up everything they must do to restore Bolsonoro. We will all see how it plays out.