Watch This: FL Governor DeSantis Fires Back BIG TIME At Apple Over This… 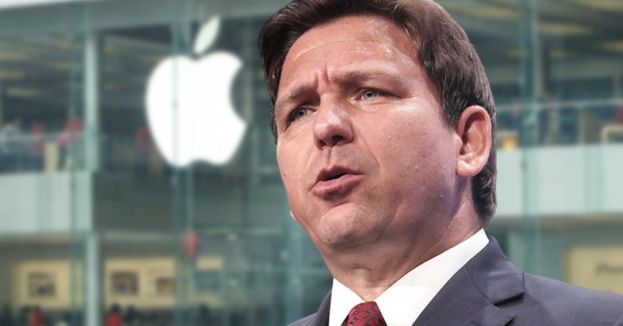 Apple has become an institution that has taken offense to Elon Musk’s new free speech policy on Twitter.

The giant computer/media company has even threatened to yank Twitter’s app from its app store. Apple is making this threat while it inhibited an app called Airdrop from being used by Chinese citizens protesting the Communist regime.

Apple may have gone too far. According to the Blaze, Musk has gotten a powerful ally.

“Florida Gov. Ron DeSantis said on Tuesday that if Apple bans Twitter from its App Store, the move would be a ‘huge mistake and ... raw exercise of monopolistic power’ that would warrant a response by the U.S. Congress.”

When Apple threatened to pull the Twitter app from its store, Musk threatened to create a smartphone to compete with the Apple line of iPhones. Such a move would cut into Apple’s bottom line should Musk follow through.

Musk has been undeterred from his desire to make Twitter a free speech platform.

“Musk has indicated that he wants Twitter to be a forum for free speech. Since taking over the social media company, he has already reinstated some accounts, including the account of former President Donald Trump. Musk has said that the platform will grant amnesty to previously suspended accounts that had not violated the law or perpetrated ‘egregious spam.’”

Musk has also ended Twitter’s censorship of COVID-19-related content. He has promised to publish private files from Twitter concerning the suppression of free speech.

Just the News reports that Gov. DeSantis minced no words about Apple’s threat.

“When you also hear reports that Apple is threatening to remove Twitter from the app store because Elon Musk is actually opening it up for free speech and is restoring a lot of accounts that were unfairly and illegitimately suspended for putting out accurate information about COVID, that’s like one of the main things being reinstated.

So many of things these experts were wrong about, and you had people on Twitter that were calling that out, and the old regime at Twitter, their response was to just try to suffocate the dissent, and Elon Musk knows that’s not a winning formula so he is providing free speech.”

DeSantis made a chilling comparison between what Apple is doing and a particular tyrannical superpower.

“So if Apple responds to that by nuking them from the app store, I think that would be a huge, huge mistake, and it would be a really raw exercise of monopolistic power that I think would merit a response from the United States Congress. So don’t be a vassal of the [Chinese Communist Party] on one hand, and then use your power in the United States on the other to try to suffocate Americans and try to suppress their right to express themselves.”

DeSantis has previously tangled with Disney over cultural war issues. He won re-election as Governor of Florida easily. Political insiders have touted DeSantis as a possible candidate for President of the United States in the 2024 election.