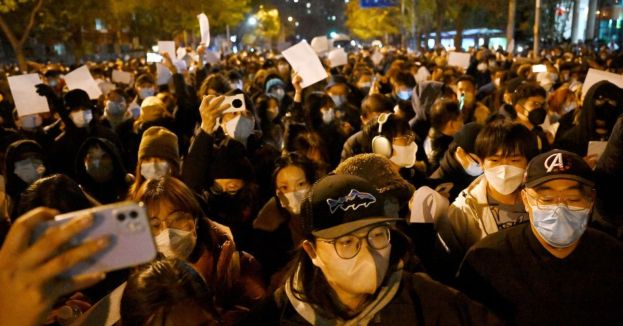 The nastiness of communist China appears again as reporters are mistreated and beaten for telling truthful stories about the country’s inner workings.

The Chinese government needs only to allow positive news reports because any negative stories will call down the international community’s wrath on them.

The latest violations of freedom came after a BBC journalist was arrested while covering the protests of the lockdowns from the coronavirus. People are sick and tired of being forced to stay indoors, so they took to the streets to voice their will.

The Daily Wire reported, “The protests began on Thursday after ten people were killed in a fire at a residential high-rise building in Urumqi, the capital city of Xinjiang autonomous region. Videos of the incident posted on social media spawned accusations that lockdowns contributed to the deaths.”

Citizens have been forced into lockdown measures to the point that they cannot leave their private homes. Many people have been locked up for over 100 days, making getting food and supplies impossible.

Edward Lawrence was the journalist that was arrested and beaten while in prison. The videos of his beatings have since gone viral all over social media.

The Daily Wire reported that the news outlet stated in a publication, “The BBC is extremely concerned about the treatment of our journalist Ed Lawrence, who was arrested and handcuffed while covering the protests in Shanghai. He was held for several hours before being released. During his arrest, he was beaten and kicked by the police. This happened while he was working as an accredited journalist.”

The communist regime does not have respect for reporters from other nations. They are more concerned about protecting a fake image than being truthful and respectful to others while in the country.