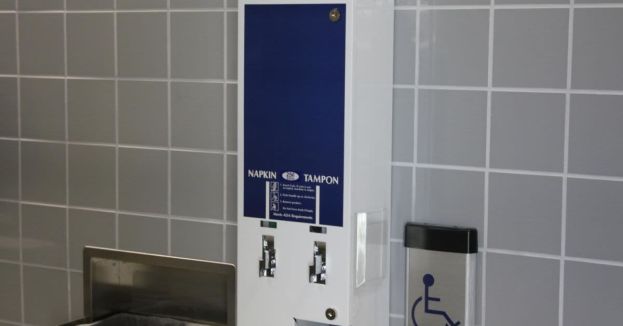 Once society, or at least the elite parts, decide that men can be women and women can be men because they wish it so, many other things, once thought unthinkable, become a reality.

One such incredible thing has become a reality thanks to a decision of the Irish Parliament, according to Newsmax.

“A vending machine that gives out free tampons has been installed in a men’s bathroom in Leinster House, Ireland’s parliament building.

“This comes as the country faces crises stemming from the cost of living to open borders policies. The general public found out about the machine’s installation in the men’s bathroom after the editor of a major newspaper posted a photo on Twitter.”

Once one thinks about it, the logic of the decision is inescapable. If women exist who believe, despite having an XX chromosome and lady parts, they are men, they will want to use the bathroom of their identified rather than their biological sex.

However, if they have not “transitioned,” a process that involves the administration of powerful hormones and extensive surgery, these trans men will still have periods. Hence, the Irish Parliament saw the need to install period products in the men’s bathroom.

Only some people are greeting the decision with good humor.

“Many were outraged by the decision to install the machine, saying that it was a waste of money while citizens are struggling to get by. One person tweeted, ‘is this a joke or what? World gone mad sadly.’ Others called the decision ‘more woke nonsense,’ ‘woke on speed,’ ‘performative nonsense’ and said that ‘Ireland has officially jumped the shark.’”

Not everyone was quite as astonished. Journalist Donal O’Keeffe even coined a new phrase. “Men with vaginas.” After all, they have periods, too, and need tampons to deal with them.

Pink News reported that a group called Trans and Intersex Pride Dublin also praised the decision. “everyone who menstruates should have easy access to menstrual products without shame or stigma.”

“The inclusion of menstrual products in the men’s bathroom in Leinster House means trans men and non-binary people who menstruate can access them instead of going into the women’s bathroom if they don’t feel comfortable doing so.

“Trans people are more likely to experience poverty and be in low paying jobs which means many trans people who menstruate may not have the money to buy products.”

Only someone who is transphobic could disagree.