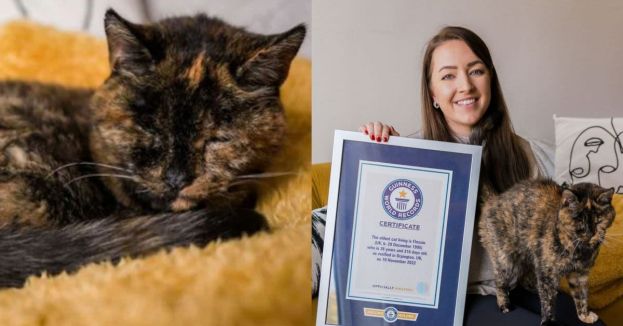 The Guinness Book of World Records has officially recognized a 27-year-old British cat as the oldest living cat in the world.

The senior feline Flossie was named the oldest living cat just three days before her 27th birthday. Her actual age at the official recognition was 26 years 316 days, equating to around 120 human years.

Vicki Green recently adopted the soft and cuddly brown and black kitty. Flossie’s last owner had made a difficult decision to turn her over to the Cats Protection facility because he could no longer care for her.

Naomi Rosling, the Branch Coordinator of Cats Protection, said, “It wasn’t an easy decision.” “He sought our help when it was in Flossie’s best interests. Responsible cat ownership is when someone thinks about an animal’s needs above their feelings.”

She noted, “We were flabbergasted when we saw that Flossie’s vet records showed her to be 27 years old.”

Flossie’s life story began in 1995 when she was adopted by a worker while living with a colony of strays outside of Merseyside Hospital. She lived with her companion for ten years. Her owner died, and her sister adopted Flossie, where she lived for another 14 years. They, too, passed, and Flossie was given sanctuary by her second owner’s son, who took care of her from the age of 24 until deciding to let her go to Cats Protection.

Not long after being relinquished to the facility, Flossie was matched with Vicki, who wanted to adopt a senior cat. Vicki had been the proud owner of Honeybun, her 21-year-old loyal pet companion, and had experience caring for a senior.

When she first went to her new home, Vicki said, “She was loud for the first few nights because she can’t see in the dark and was a bit confused in her new surroundings, but she sleeps through the night now, snuggled on the bed with me.”

Vicki added, “She never turns her nose up at the chance of a good meal.” “She’s so affectionate and playful, especially sweet when you remember how old she is. I’m immensely proud that Cats Protection matched me with such an amazing cat.” “Our new life together already feels like home for Flossie, which makes me so happy.”

Vicki hopes those who want to bring a cat into their family will think about Flossie’s story and consider providing a caring home to a loving senior cat.