Watch This: Mumbling Stumbling Joe Biden Has Another Brain Fart 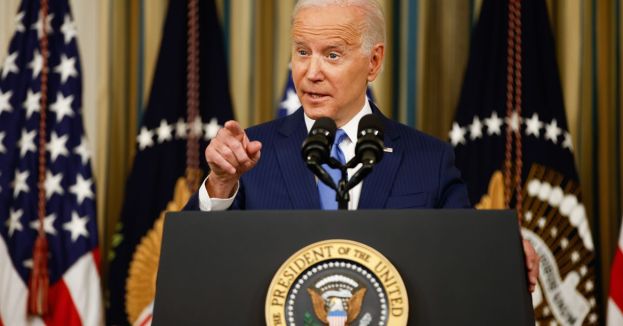 The RedState has a score for Biden, showing 0 for the President and a score of 1 for the teleprompter.

The scores are based on Biden’s attempts to talk about his failed economy while mumbling.

According to the RedState, watching Joe Biden and his ongoing battles with reading scripts provided to him aloud is much the same as not looking away from a crash site. We don’t want to look but can’t help ourselves and have to look.

This situation occurred on Friday when President Biden spoke to business and labor leaders about his disastrous economy. Biden said, “This week, we saw the growth in prices and business pay for goods and services come down, as well. Gas prices are down, but it’s gonna take time to get inflation back to normal levels if we keep our job market strong so we can see setbacks along the way; I don’t doubt that, but thus far, we’re in good shape. But, we’re laser-focused on that.”

Biden said, “There’s not a single solitary Biden man that is old; uhh, younger than any Biden woman.”

The RNC also notes Biden saying, “The [so-called] Inflation Reduction Act did a lot of things.”

Another observation from the RNC has Biden saying, “If Republicans take control, the prices are going to go up.”

The bottom line, according to the columnist’s report from the RedState, “Democrat Party owes it to the American people to keep Joe Biden far away from anything to do with the 2024 presidential election, which I suspect they’ll do—one way or another.”

The RedState also notes the Republicans were handed the 2022 midterms on a silver platter. That both chambers, House and Senate, were there to be taken. While the GOP got the majority of votes for control of the House, it failed to take control of the Senate. The words “cheating” and “stolen elections” may be used to blame for the loss, but the GOP remained divided going into the midterms.

It is also pointed out in the RedState report that what happened during the midterms can be compared to something Einstein said about repeating the same thing repeatedly and expecting different results is what Einstein called the definition of insanity.