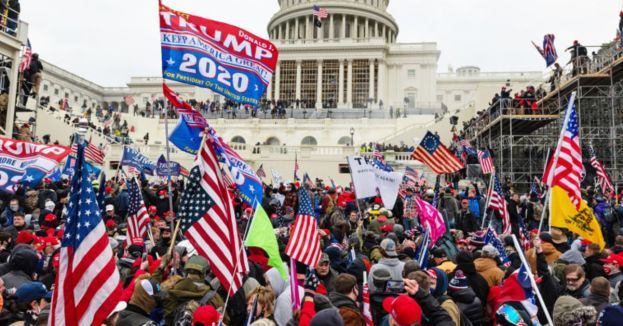 The January 6 protests will go down in the history books as an event that raises more questions than answers.

The Republicans claim that the day was a peaceful demonstration that took a turn when anti-American forces showed up and acted like Donald Trump supporters and then started to act violently. But the Democrats claim that the conservatives were the ones that started it all.

The question of who the mystery people were is under investigation. And FBI Director Christopher Wray knows the answers. But when Republican Clay Higgins asked Wray about the answer, all Wray could do was refuse to answer the question.

Wray refused to answer whether or not the FBI planted sources in the crowd. His answer was nothing more than a dodge, so he did not have to admit the truth.

The Daily Caller reported that “Republican Louisiana Rep. Clay Higgins asked Wray at the hearing if the FBI had ‘confidential human sources embedded within the January 6 protesters’ that day. Wray said he had to ‘be very careful about when we do and do not and where we have and have not used’ such sources, ‘categorically’ denying that bureau sources or employees ‘instigated or orchestrated January 6.’”

Higgins wanted to know if the Democrats planted their people for the sole purpose of inciting a riot. It would have been the perfect cover to plant operatives to create an event to get former President Donald Trump in trouble.

The Daily Caller reported that Higgins had asked, “’ Did you have confidential human sources dressed as Trump supporters inside the Capitol on January 6 before the doors [being] opened?’ Higgins subsequently questioned. Wray began to repeat that he needed to be ‘very careful,’ but the congressman loudly insisted, ‘It should be a no! Can you not tell the American people no?’ But all Higgins could do was play around and avoid answering the question.