Heart Pounding Video: Trump Releases Ad Ahead Of Midterms Highlighting Some Of The Superstar Candidates 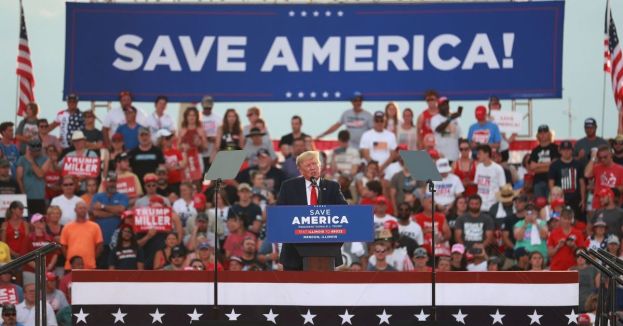 Heart Pounding Video: Trump Releases Ad Ahead Of Midterms Highlighting Some Of The Superstar Candidates Trump releases a video days before the midterm elections that encourage voters to encourage a red wave and save America.

The video highlights what Trump thinks about the upcoming elections and has Republicans cheering.

According to Breitbart, “The video starts with audio of Trump saying that next week’s election is a “referendum” on President Joe Biden, House Speaker Nancy Pelosi (D), and Democrat Senate Leader Chuck Schumer (D).”

The article continues, “The radical left Democrat Congress is destroying our country,” Trump said. “You’ll elect an incredible slate of True America First Republicans up and down the ballot.”

The video encourages Americans to vote to help save America from the Democrats. Then, it shows voters who they need to vote for in this election. According to Breitbart, “The video then cuts to a montage of America First Republican candidates, including Arizona’s Kari Lake and Blake Masters, Pennsylvania’s Mehmet Oz and Doug Mastriano, Ohio’s J.D. Vance, North Carolina’s Ted Budd, Alaska’s Sarah Palin, and Kelly Tshibaka, Georgia’s Herschel Walker, Texas’s Gov. Greg Abbott, Michigan’s Tudor Dixon, Wyoming’s Harriet Hageman, and Nevada’s Joe Lombardo and Adam Laxalt.”

The video states how much is at stake for Americans in this election. Breitbart says, “The country’s future is on the line, so vote like it because we need to win. We’re going to win. Up and down Republican, up and down your ballot,” Masters said in the clip. “God bless you. We’re going to make this country great again.”

The text further encouraged Americans to get out and vote in the midterms as the video shows Republican candidates. As the country continues to backslide and Americans continue to feel the pain from Biden’s policies, it’s never been more clear that we need an overhaul in Congress. We all need to do our part to show Republicans support and to help our country on November 8.