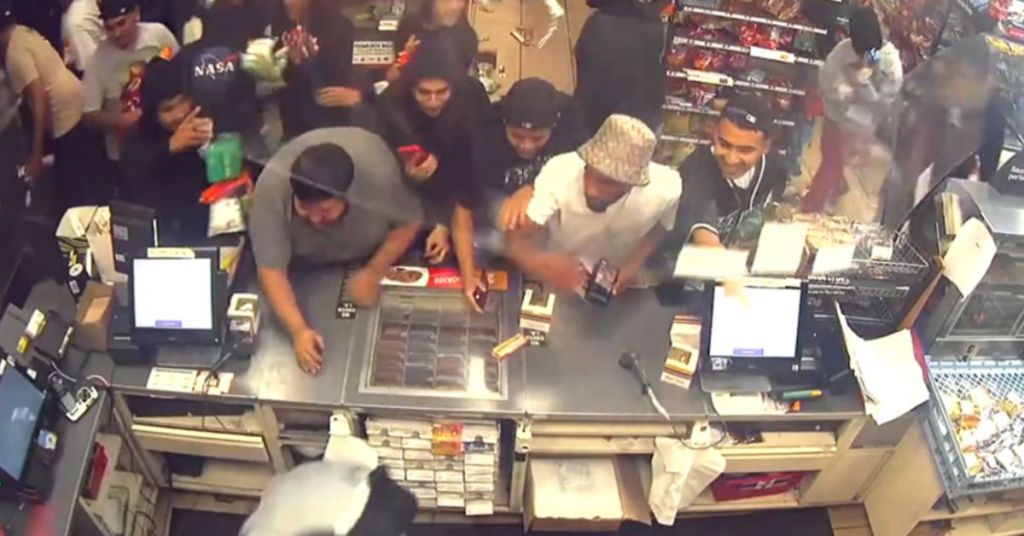 IN. ablow to liberals who excused looting as a 'means to survival,' a “flash mob” of looters, mostly African American & Hispanic youth, were filmed ransacking a 7-Eleven in Los Angeles earlier this week — making off with handfuls of cigarettes, alcohol, and lottery tickets, non of which are necessary for survival.

Video clips published by Los Angeles police show dozens of people, many of them not even trying to hide their faces, taking hold of various items as they charged the chain store Monday after midnight in the Harbor Gateway section of the city.

Part of the footage even shows the wild bunch behind the counter vacated by 7-Eleven employees and throwing electronic cigarettes and tobacco products toward a pack of people on the other side.

Snacks, drinks, cigarettes, lottery tickets, and other merchandise were all lifted from the store that also was vandalized, according to police. Looters also allegedly threw items at store employees.

After leaving the store, the crowds of suspects quickly left the area before cops arrived, police said.

The robberies occurred during a street takeover where drivers flooded and blocked a city intersection with their vehicles from all directions to create a “pit” in the middle of it, police said.

Spectators got out of their cars and watched as drivers started “doing donuts,” authorities said.

“The term ‘flash mob’ was first used to describe a large public gathering at which people perform an unusual or seemingly random act and then disperse, typically organized using the internet or social media,” the LAPD said in a statement.

“In the latest cases, however, ‘flash mobs’ have turned from fun spontaneous events to opportunistic criminal occurrences.” Police were seeking the public’s help in apprehending the suspects.

One of the suspects caught on video was a man wearing a Colorado Rockies hat throwing food at the store employee. Detectives have identified some of the offenders; the video will likely lead them to more... as will the fingerprints on the countertops.

Those involved in the incident face multiple charges, including grand theft, looting, and vandalism.

LAPD says if anyone is involved in a street takeover, their car could be taken for three days. That includes people watching, filming, and driving during a raid.