Must See: Trump & Tucker Laugh It Up At 'Let's Go Brandon' Fest During Golf Tourney 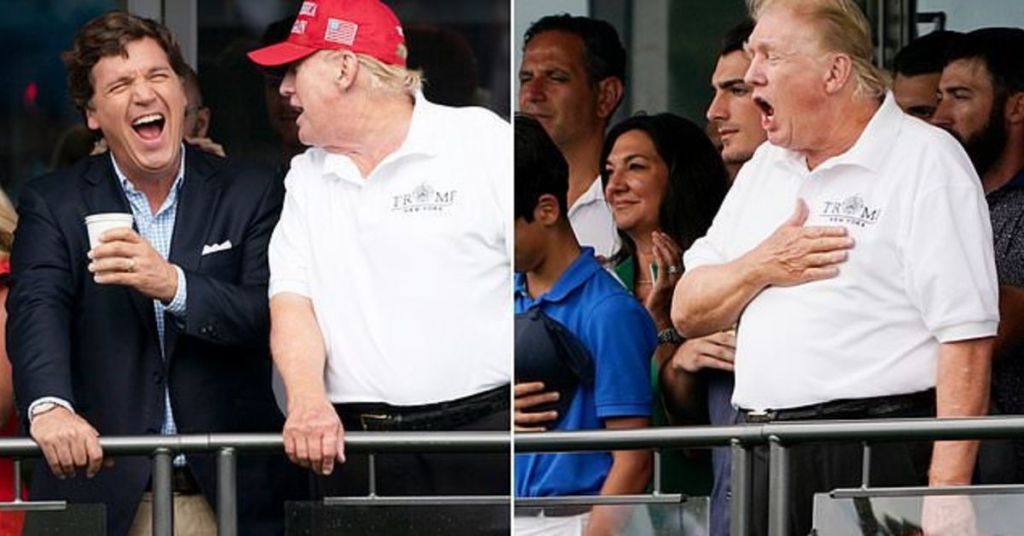 The former president, 76, and the TV star who lately insisted he'd never run for president were all smiles as Georgia Rep. Marjorie Taylor Greene joined them to watch the action unfold at the Trump National Golf Club.

LIV arrived at Trump's club on July 29, igniting controversy from some 9/11 victims who say the Saudi-supported tournament should not be welcomed on US shores.

The former president ignited outrage by stating there was no proof Saudi was linked to the September 2001 atrocity in New York City - which sits only 40 miles from Bedminster - Washington DC and Pennsylvania.

Sunday is the last day of the tournament in Bedminster. It will now move onto The International golf club near Boston before concluding at Rich Harvest Farms in Illinois on September 18.

It is unclear what jokes the group saw funny - yet they may have been discussing Trump's latest jibe at Biden, which saw him propose the president's rapid COVID reinfection was dementia.

Taking to his Twitter rival TruthSocial on Sunday, Trump joked: "Joe Biden's second bout of Covid, sometimes referred to as the China Virus, was sadly misdiagnosed by his doctors."

"He instead has Dementia but is happily recovering well."

"Joe is thinking of moving, part-time, to one of those beautiful Wisconsin Nursing Homes, where almost 100% of the residents miraculously, and for the first time in history, had the strength and energy to vote — even if those votes were cast illegally."

Trump, who has gone on to tease a possible 2024 run for office, concluded: "Get well soon Joe!"

"I have zero ambition, not just politically, but in life," Carlson declared to onlookers on July 15, in an interview with former New York Times media columnist Ben Smith.

"My ambition is to write my script by 8 pm," the longtime host of Carlson Tonight continued to add, declaring that he was happy in his day job and that a foray into the world of politics - similar to Trump's several years ago - was not in the cards.

"I don't want power, I've never wanted power," Carlson explained to Smith, continuing, "I'm annoyed by things, I want them to change - but I've never been motivated by a desire to control people."

When also asked by the journalist on the chances of a run in 2024 following swirling rumors online, Carlson laughed off the inquiry, flat-out declaring to Smith that he was"not running" and that he was a "talk show host."