How Could The Pope Give Pelosi Communion After He Just Said This About Abortion? 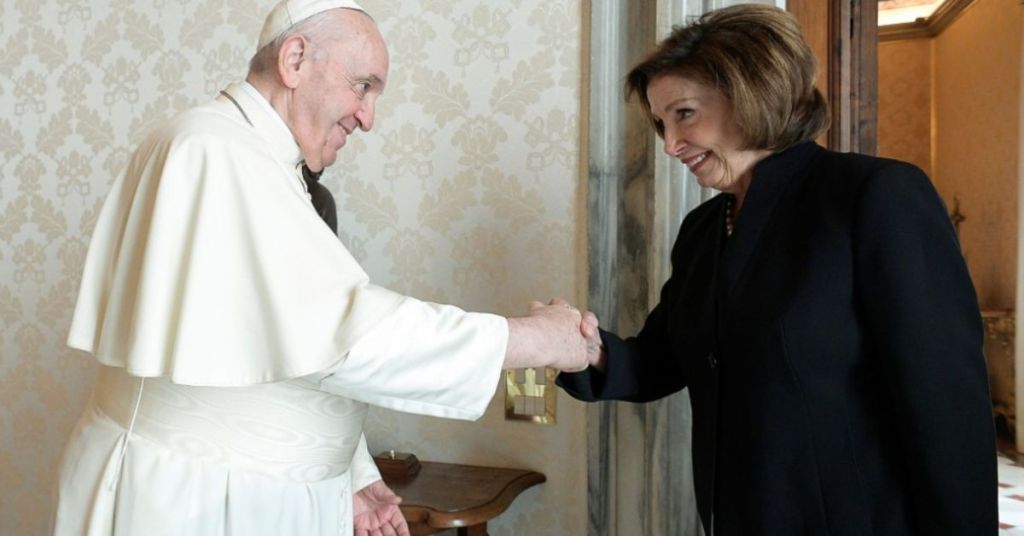 In a lengthy interview with Reuters at the Vatican, the Pontiff was questioned regarding the U.S. Supreme Court overturning Roe v. Wade on June 24 (5-4 decision). Further on that same day, the high court upheld the Dobbs v. Jackson Women's Health Organization case (by a 6-3 decision), which held a Mississippi law prohibiting abortion following the first 15 weeks of a woman's pregnancy.

Originally, Francis announced he did not have enough information to address the legalities of the Supreme Court choices. He then reaffirmed the Catholic Church's teachings of how "life" begins at the moment of conception.

While talking to Reuters, Francis compared abortion to "hiring a hit man" and then announced: "I ask: Is it legitimate? Is it right to eliminate a human life to resolve a problem?"

At the same time, Francis has previously announced his opposition to abortion has a human component — and no religious reasons.

Citing one example from 2015, the Pope showed sympathy for women who chose to have abortions.

He further made it more comfortable for women to be absolved of what Catholics view as the sin of abortion.

Reuters further asked the Pontiff whether practicing Catholics who support abortion should be permitted to participate in Communion.

The Reuters question was probably a reference to House Speaker Nancy Pelosi, D-Calif., recently being banned from Communion in her home diocese of San Francisco.

About that incident, Archbishop Salvatore Cordileone publicly denied Pelosi for future Communions, stating her open-ended view on abortion was "purely pastoral, not political."

In a recent letter, Cordileone wrote: "After numerous attempts to speak with her [Pelosi] to help her understand the grave evil she is perpetrating, the scandal she is causing, and the danger to her own soul she is risking, I have determined that the point has come in which I must make a public declaration that she is not to be admitted to Holy Communion unless and until she publicly repudiate her support for abortion 'rights' and confesses and receive absolution for her cooperation in this evil in the sacrament of Penance."

According to reports, Speaker Pelosi "regularly" partakes in Communion at a parish in Washington, D.C.; and last week, she received the sacrament at a papal Mass in the Vatican.

"I think in particular of all the women who have resorted to abortion. I am well aware of the pressure that has led them to this decision. I know that it is an existential and moral ordeal," Francis announced in a letter to Archbishop Rino Fisichella, head of Jubilee initiatives.

"I have met so many women who bear in their heart the scar of this agonizing and painful decision," stated the pope.

In May, the Vatican took the first step in this direction, declaring the creation of a special team of priests for the Jubilee called "missionaries of mercy," who would be given the faculty to absolve the sin of abortion. Though Tuesday's declaration goes further, making the absolution universally available.

"I think this is big and very positive news," announced theologian Fr. Robert Dodaro, president of the Patristic Institute Augustinianum in Rome. "Pope Francis is showing enormous compassion for people in difficult situations. He has always been very strong on the sacrament of penance, and... he continues to develop what has been a strong theme in his papacy, which is that God is always ready to forgive, and we should not place obstacles in the way."