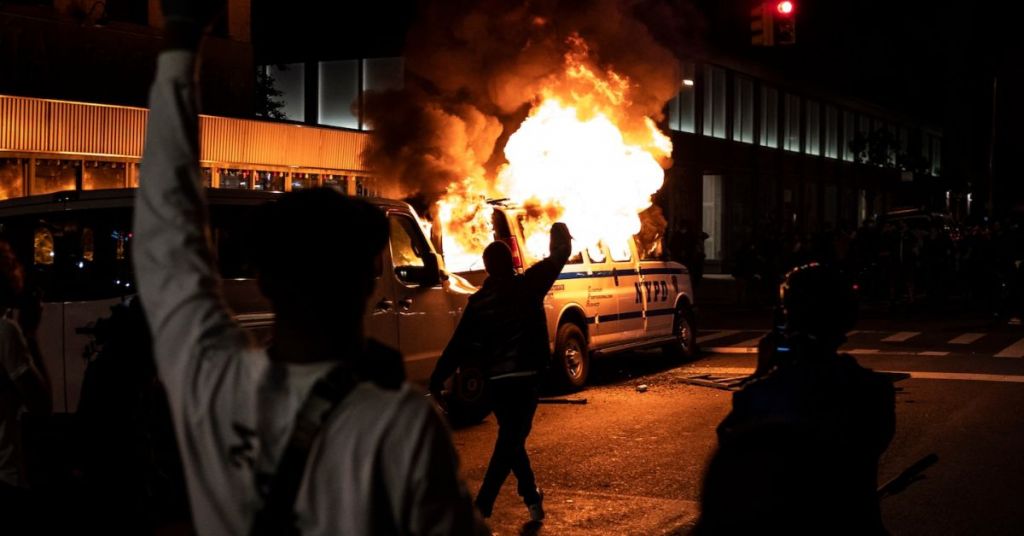 Akron officials announced a state of emergency Monday after chaotic demonstrations erupted in the city over the fatal police shooting of an unarmed black man — as demonstrators massed outside Mayor Dan Horrigan’s home chanting “defund the police.”

Mayor Dan Horrigan issued the emergency announcement first thing in the morning following protests over the shooting death of 25-year-old DoorDash deliveryman Jayland Walker plunged into chaos in the Ohio city overnight. A citywide curfew was being established, and the city’s Fourth of July fireworks were canceled.

The mayor announced the curfew applied to the downtown Akron area and would be in effect from 9 p.m. Monday until 6 a.m. Tuesday.

“Early yesterday, we had several peaceful protests in the downtown footprint related to the officer-involved shooting of Jayland Walker. These protests did not escalate to violence and destruction,” Horrigan announced in a statement.

“However, as night fell and others began to join, the protests became no longer peaceful. There was significant property damage done to downtown Akron. Small businesses up and down Main Street have had their windows broken. We cannot and will not tolerate violence or the destruction of property.”

Horrigan went on, “In light of the damage that has occurred and in order to preserve peace in our community, I have declared a state of emergency, implemented a curfew and canceled the fireworks which were scheduled for tonight.”

Almost 100 demonstrators assembled outside Horrigan’s residence and were met by cops in riot gear Monday.

The protesters left a written list of demands, according to NBC News.

Participants yelled and ordered that the eight officers who shot Walker be fired immediately.

Widespread demonstrations had been held in Akron since the June 27 police shooting of Walker, yet they intensified Sunday after cops issued bodycam footage of the fatal ordeal.

Walker was unarmed when Akron police began chasing him on foot and firing upon him after an attempted traffic stop, authorities unveiled at a Sunday news conference.

The eight officers involved had believed Walker shot at them earlier from a vehicle and feared he was preparing to fire again, authorities went on.

It isn’t clear how many shots were fired by the officers, yet Walker sustained over 60 bullet wounds, police announced.

The bodycam footage revealed Walker, who was wearing a black ski mask, exiting the passenger door of the vehicle and running toward a parking lot.

Police were chasing him for roughly 10 seconds before the barrage of gunfire broke out, the video revealed.

At least one officer had first attempted to use a stun gun, yet it didn’t work, police said.