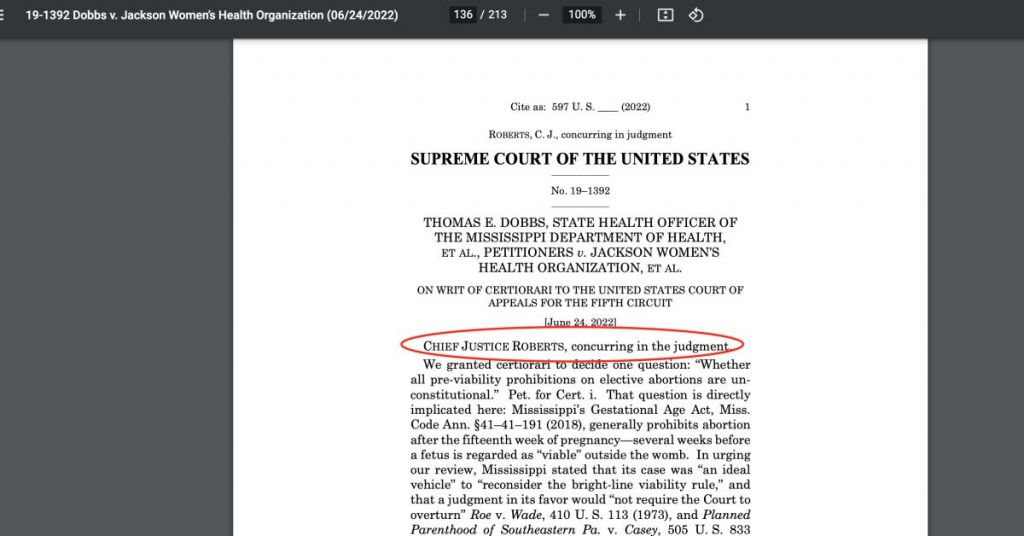 The Supreme Court officially overturned Roe v. Wade, in a 6-3 decision surprisingly with Justice Roberts voting in favor of the overruling.

The court’s controversial yet crucial ruling gives individual states the right to set their independent abortion laws without concern for legal consequences due to the higher court ruling.

Most media outlets are reporting a 5-4 decision, showing they simply are using the leaked document - but it seems Chief Justice Roberts joined his conservative colleagues to affirm the verdict. Blabberbuzz has read through the opinion to ensure the facts are correct.

“The Constitution does not confer a right to abortion; Roe and Casey are overruled; and the authority to regulate abortion is returned to the people and their elected representatives,” a syllabus of the opinion said.

The case that triggered Roe’s demise after nearly a half-century, known as Dobbs v. Jackson Women’s Health Organization, is directly connected to a Mississippi law that banned nearly all abortions after 15 weeks of pregnancy.

Dobbs was by far the most significant and controversial issue of the court’s term. It was also deemed the most serious threat for pro-abortion activists since a 1992 case, Planned Parenthood v. Casey, in which the Supreme Court reaffirmed Roe.

The early May leak of a draft of the majority opinion, which overturned Roe, sent shockwaves across the country and this fresh ruling is expected to create great turmoil and possible riots nationwide.

The leaked opinion marked a major victory for conservatives and pro-life advocates who had struggled for decades to undermine Roe.

However, Republican lawmakers in Washington, who are hoping to win big in the November midterm elections, focused more on the leak itself than on what it contained. They also called out the protests that formed outside the homes of some conservative justices, accusing activists of trying to intimidate the court.

Chief Justice John Roberts vowed that the work of the court “will not be affected in any way” by the leak, which he described as a “betrayal” meant to “undermine the integrity of our operations.”

Alito, in his first reported remarks since the leak, spoke remotely from the court building to a crowd attending a forum at George Mason University’s Antonin Scalia Law School. The Washington Post reported that, when asked during that event how he and the other justices are holding up, Alito said, “This is a subject I told myself I wasn’t going to talk about today regarding, you know — given all the circumstances.”