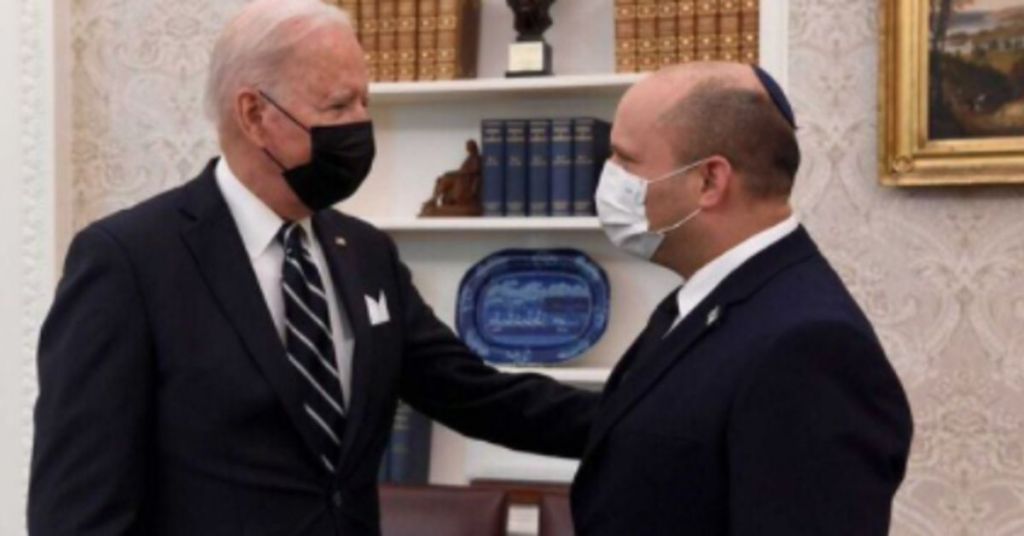 President Biden told Israel Prime Minister Naftali Bennett at the White House Friday that he was committed to seeking a diplomatic agreement with Iran over its nuclear program — before ridiculing the use of “other options” if that did not work.

In their first face-to-face meeting since Bennett became Israel’s leader in June, the president maintained that the US was committed to “ensure Iran never develops a nuclear weapon.”

“We’re putting diplomacy first and seeing where that takes us,” Biden continued. “But if diplomacy fails, we’re ready to turn to other options.”

White House press secretary Jen Psaki refused to answer later Friday on what the president meant by “other options.”

Asked when Biden might think he had exhausted all diplomatic attempts and turn to “other options,” Psaki announced she was “not going to give an end date on that given it is, by far and away, our best option and the preferable option.”

Since then-President Donald Trump pulled the US out of the 2015 nuclear agreement in 2018, Iran has abandoned every limitation the accord imposed on its nuclear enrichment.

Tehran now enriches a small amount of uranium up to 63 percent — a short step from weapons-grade levels — compared with 3.67 percent under the agreement. It further spins far more advanced centrifuges and more of them than were permitted under the accord, worrying nuclear nonproliferation specialists even though Iran maintains the program is peaceful.

Psaki cast blame on Trump for the situation, telling reporters that “we’re in this situation because the prior administration pulled out of the Iran nuclear deal and prevented us from having the visibility we need into Iran’s capabilities.”

Bennett, who like his predecessor Benjamin Netanyahu has attempted to dissuade the US from reentering the deal, told Biden Friday that he was “happy to hear your clear words that Iran will never be able to acquire a nuclear weapon.”

The prime minister further labeled Iran “the world’s number-one exporter of terror, instability, and human rights violations” and claimed that “these very days illustrate what the world would look like if a radical Islamic regime acquired a nuclear weapon.”

“That marriage would be a nuclear nightmare for the entire world,” Bennett continued.

Indirect talks between the US and Iran in the hope of salvaging the deal have stalled and Washington continues to maintain crippling sanctions on the country as regional hostilities simmer.