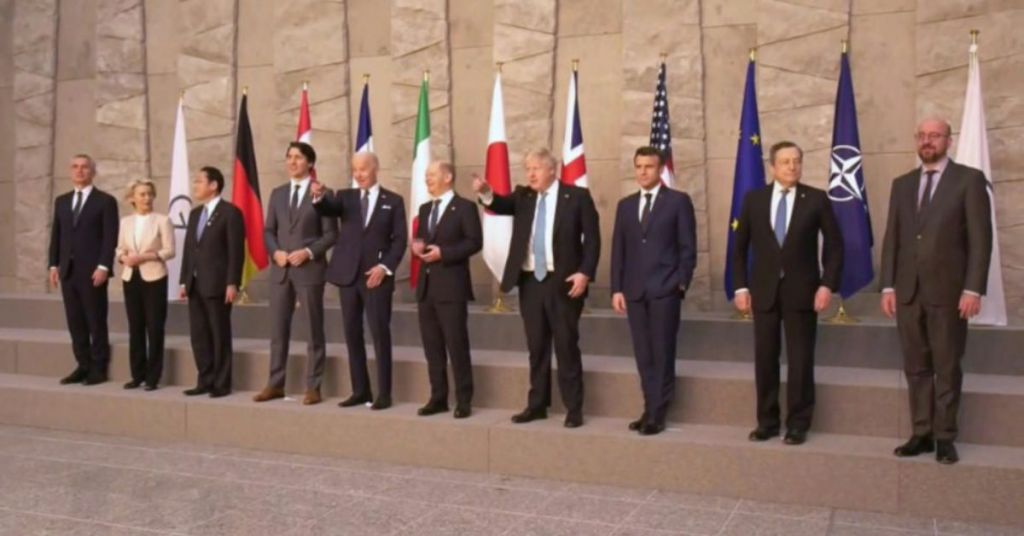 World leaders appearing at the G-7 summit in Germany sat on a high horse on Sunday. They fooled about notorious images of Russian President Vladimir Putin climbing on horseback while shirtless. Chief among the mockers were British Prime Minister Boris Johnson and Canadian Prime Minister Justin Trudeau.

"Jackets on? Jackets off? Shall we take our clothes off?" Johnson asked as the leaders of Canada, France, Germany, Italy, Japan, the United Kingdom, the United States, and the European Union were gathering to get an official photo of their G-7 luncheon. Trudeau joked that he and the leaders were "going to get the bare-chested horseback riding display," referencing 2009 images of a shirtless Putin riding a horse, according to the Daily Mail. "We have to show that we're tougher than Putin," Johnson said.

Johnson could be heard on video saying, "We've got to show them our pecs." European Union President Ursula von der Leyen added that "horseback riding is the best."

President Joe Biden was among the leaders attending the lunch but did not seem to join in mocking Putin. He is meeting with the G-7 leaders in Germany to discuss proposals for increasing pressure on Russia to stop its war in Ukraine and rising inflation before traveling to Spain for a NATO leader's summit.

Ukraine ordered the remainder of its troops to withdraw from Severodonetsk, a key eastern city, on Friday after weeks of Russian bombardment. The city, which had approximately 100,000 people before the war, served as an administrative center for the Luhansk region and has been a focal point in the war for weeks.

Earlier, however, Biden criticized Russia's attack on Kyiv as "barbarism." "It's more of their barbarism," he said during the official welcome ceremony for G7 leaders at Schloss Elmau.

As the G7 leaders gathered in Germany, Russia ramped up its attacks in Ukraine. Russian forces attacked the capital of Kyiv for the first time in weeks, striking at least two residential buildings.

Ukraine's minister of foreign affairs Dmytro Kuleba tweeted a photo of a young girl being carried out of the rubble, strapped to a stretcher, and being aided by emergency workers. Her father was killed and her mother was injured, according to local reports.

"This 7 y.o. Ukrainian kid was sleeping peacefully in Kyiv until a Russian cruise missile blasted her home. Many more around Ukraine are under strikes. G7 summit must respond with more sanctions on Russia and more heavy arms for Ukraine. Russia's sick imperialism must be defeated," Kuleba wrote on Twitter.

Culture minister Oleksandr Tkachenko told local media that a kindergarten was hit. Before Sunday's attack, Kyiv had not faced any Russian airstrikes since June 5.