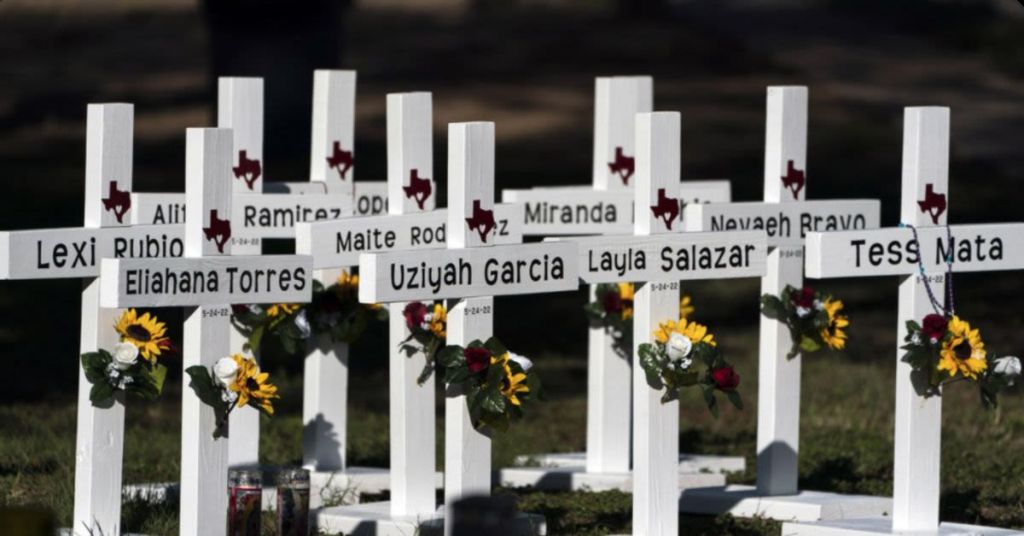 The 18-year-old Texas shooter who murdered 19 children and two teachers chillingly messaged a random girl: 'I got a lil secret I wanna tell u. I'm about to...'

Salvador Ramos sent an Instagram private message to the California woman, hinting at the terror he would inflict on Robb Elementary in Uvalde.

The killer asked her to repost pictures of two of his AR-15s as well as a magazine of ammunition he bought last week.

He sent her another haunting post at 9.16am on Tuesday - two hours before his deadly attack - saying: 'Ima air out.'

And as the shooting commenced, it emerged he had also tagged her in a highlighted post on his page with pictures of his guns.

The girl was confused by the slew of random messages but engaged with him because she was afraid of the strange man. She reacted with horror last night when she heard of the devastation he had inflicted on the young children in the close-knit Texas community.

Ramos is believed to have shot his grandmother before racing away in a truck and crashing it outside the school.

The vicious high school dropout proceeded to rush into the school before spraying gunfire indiscriminately at teachers and little children.

Horrific reports reveal the youngsters were seen attempting to scramble out of windows amid the hail of bullets.

Ramos' fisrt messages to the girl on Instagram from May 12 painted a picture of a twisted freak plotting to carry out an attack.

He wrote from his account @sal8dor_: 'You gonna repost my gun pics.' She replied: 'What your guns gotta do with me.'

The girl asked 'about to what' to which he answered: 'I'll tell you before 11.' He said he'd text her in an hour and urged her to respond.

'I got a lil secret I wanna tell u,' he messaged with a smiley face emoji covering its mouth. 'Be grateful I tagged you,' he wrote.

She replied: 'No it's just scary,' adding: 'I barely know you and you tag me in a picture with some guns?'

The woman reacted with horror. 'He's a stranger I know nothing about him he decided to tag me in his gun post,' she wrote. 'I'm so sorry for the victims and their families I really don't know what to say.'

She added: 'The only reason I responded to him was that I was afraid of him I wish I stayed awake to at least try to convince him to not commit his crime. I didn't know.'

Ramos, born in North Dakota but who lived in Uvalde, was a student at Uvalde High School before finding work at a Wendy's.

He had bought the guns he used in the shooting when he turned 18.

Under a new Texan law passed in September, those aged 18-21 could buy guns if they had a protective order.

The law also removed the requirement for a permit for a handgun. Rifles were already permitted in Texas without licenses.

Ramos's social media was filled to the brim with photos of his new guns, which he bought on his 18th birthday, state senator Roland Gutierrez reported.