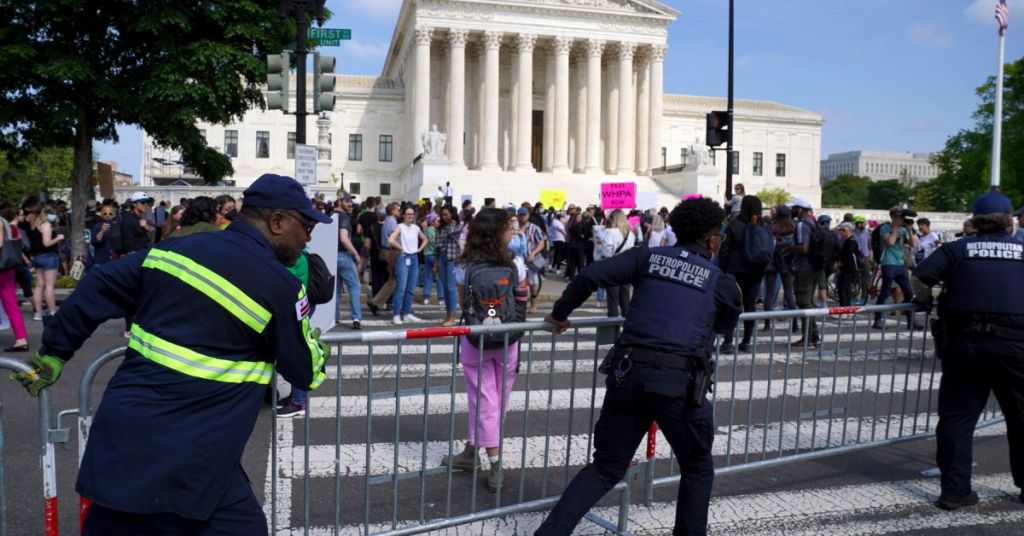 A group of people wearing black walked by the Supreme Court as night fell on Friday in Washington, D.C., rallying against the ruling that repealed Roe v. Wade and ended the nationwide right to abortion.

The protestors are part of a group known as Bite Back, according to an editor for WTOP. The front line was comprised of people holding black umbrellas and a banner that read: "They cannot control our bodies."

Demonstrators have gathered outside the Supreme Court and around the country since the ruling Friday in the Dobbs v. Jackson Women’s Health Organization case. Law enforcement officials, including those in riot gear, could be seen deploying in places around the high court throughout the day.

A group of protesters also assembled outside the Virginia home of Justice Clarence Thomas, and more demonstrations are being advertised to take place outside the houses of the conservative justices in the days to come. Among the roving protests through the streets of Washington on Friday night, reporters spotted an American flag being set on fire and demonstrators chanting "Burn it down."

Protests resumed in cities across the country Saturday after the Supreme Court's decision to overturn the landmark Roe v. Wade ruling that had guaranteed the right to abortion in the United States.

As states began to pass abortion bans and clinics ceased offering the procedure, large crowds gathered in cities including New York, Los Angeles and Atlanta, some triumphant, others disturbed by the decision that stripped away women’s constitutional right to abortion.

Both sides projected the fight over abortion would continue. Key points:

An off-duty Rhode Island police officer who was running for state Senate was detained on an assault charge after allegedly attacking his female opponent during an abortion rights protest Friday night.

Providence police patrolman Jeann Lugo, 35, was arrested on charges of simple assault and disorderly conduct, state police said Saturday. Lugo turned himself in, was arraigned and released, it said.