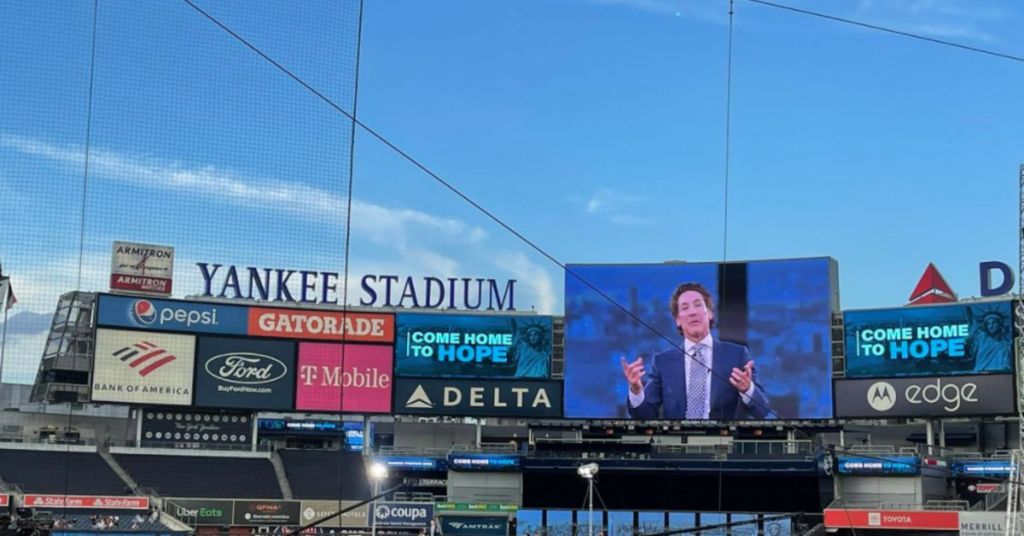 Thousands gathered in Yankee Stadium in New York City on Saturday for Joel Osteen's "Come Home to Hope Event" — an evening centered on instilling in an increasingly anxious and blue generation a restored sense of hope and purpose.

Osteen, who hosted the event with his wife, Victoria, concentrated his message on discovering hope amid adversity and remaining faithful in times of difficulty — a message he said was timely in the wake of COVID-19, economic turmoil, and societal unrest.

"I want to talk to you tonight about freedom in the fire," the pastor, who leads Lakewood Church in Houston, Texas, announced. "God won't allow the difficulty unless He has a purpose for you. There is potentially locked up in you that will only come out through adversity."

The speaker and bestselling author mentioned Psalm 4:1, where David stated, "God enlarged me in my time of distress," to remind audiences that God uses difficulties and times of trial, betrayal, and loss to refine and sanctify His people.

"In the fire, he discovered favor," Osteen emphasized. "The truth is, it's setting you up. What you can't see is God is enlarging you. ... You're going to see new growth, opportunity, and talent. … Don't fight the fire. Stay faithful in the fire. … God has a comeback for every setback."

"Everything is a controlled burn. The enemy can't touch you without God's permission," Osteen stressed, mentioning the story of Job, who trusted God despite obstacles.

"God not only was for Job, gave him his health back, but He walked him out with double. … The Scripture says Job went on to live 140 years and enjoy his children and grandchildren. Maybe like Job, you're sitting in the ashes, looking at what you lost, what didn't work out, what you're up against. You can easily live discouraged, feels like a wildfire. The truth is, it's a controlled burn. God wouldn't have allowed it if you weren't going to come out better."

Saturday's "Come Home to Hope" event honored the first time in over three years that the Osteens held a large-scale stadium event because of limitations arising from the COVID-19 pandemic. Their previous appearance at Yankee Stadium was for "A Night of Hope" in 2014. Their first visit in 2009 marked the very first non-baseball event at the stadium. This year, Lakewood held a "Global Virtual Stadium" event for those unable to attend in person.

"Let's recharge, let's refuel again," she explained to CP. "If we don't get with it ... and just take back our lives, we're going to be just stuck in perpetual problems. Because there's always going to be problems, but it's what we do with those problems, it's how we view those problems that make all the difference in the world."