Must See: Biden In Uvalde Gives Awkward Response To Parents Yelling 'Do Something' 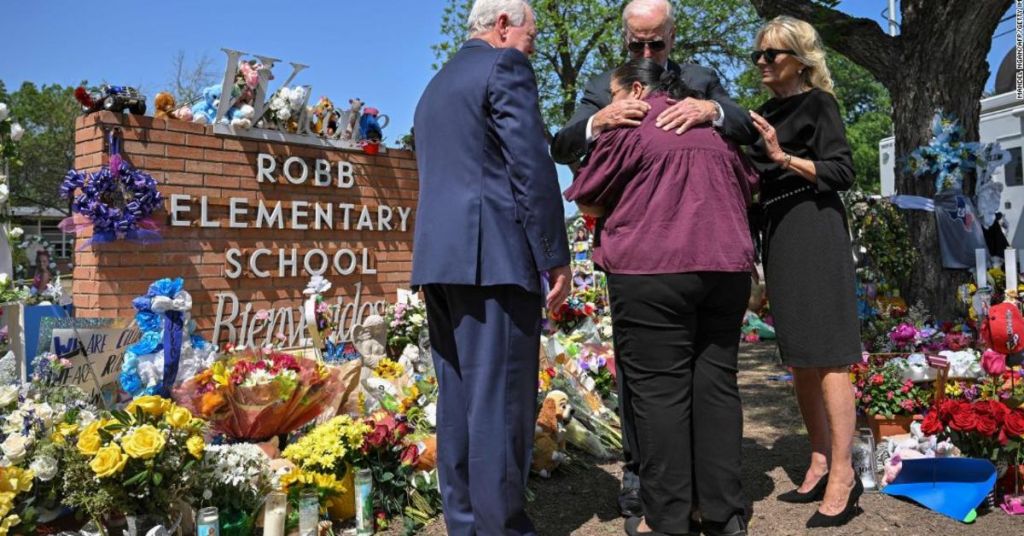 Texas Governor Gregg Abbott was booed and welcomed with chants of demands for changes as he appeared at Robb Elementary School in Uvalde, Texas, with President Joe Biden and First Lady Jill Biden to mourn the 19 children and two teachers shot dead in the fatal shooting.

Biden embraced the school’s principal Mandy Gutierrez and touched photos of the slain children as he arrived on Sunday to mourn with the community devastated by the worst elementary school mass shooting since the 2012 Sandy Hook shooting.

He walked for several minutes along the school sign blazed with flowers, candles, and written tributes to read the names of the victims, and at one point, wiped away a tear.

The first couple arrived at JASA-Kelly Airfield in San Antonio, Texas - about 85 miles from the small southwestern community that was rocked by disaster on Tuesday.

Upon landing, they were met by Governor Abbott, an ally of Donald Trump's, and his wife, Cecilia Abbott. Republican Rep. Tony Gonzales, whose district the shooting took place in, was there together with Uvalde Mayor Don McLaughlin, who has asked the Department of Justice to administer an investigation into the law enforcement response to the shooting.

Biden then went to the memorial for the slain children of the massacre and Abbott was booed and greeted with shouts of "we need help" from the crowd. Protesters also demanded new gun legislation in the aftermath of the shooting.

"Mr. President, we need your help to keep our schools safe," one man yelled at Biden.

Abbott visited with increasing challenges over the police response that saw them wait outside the school while the gunman opened fire in the classroom, modifications to the timeline and whether a different reaction could have saved more children.

It has been revealed that children inside the school were calling 911 begging for help and elite Border Patrol members who arrived on scene were told to stay back by local cops.

Biden is also under stress to try and pass gun restrictions after slamming Republicans and teenagers being able to buy rifles in the aftermath of the slaying.

It comes after his Vice President Kamala Harris called for a ban on assault weapons in the wake of back-to-back mass shootings at the funeral for a victim of the massacre in Buffalo earlier this month.

The commander-in-chief and his wife were both clad in black when they boarded the plane early on Sunday morning in an airfield in Delaware, where the first couple regularly spend their weekends.