Watch: New York City Crime Is Out Of Hand, This Brazen Daytime Robbery Proves It 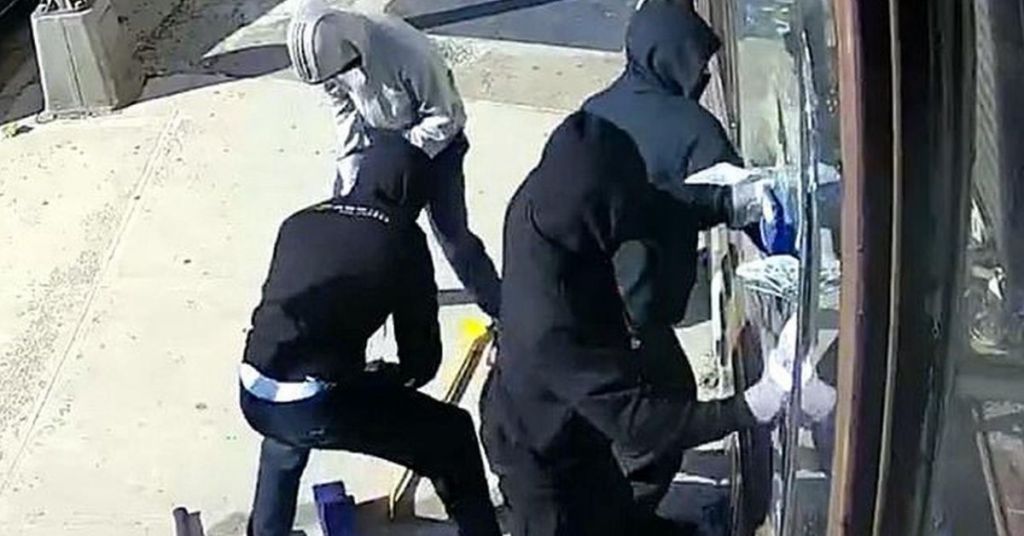 Four brazen thieves used a sledgehammer to break into a New York jewelry store and made off with $100,000 in goods in broad daylight.

Nyken Alston, 21, Alfred Long, 35, Alexander Wilson, 21, from the Bronx, were arrested for shattering the front window of Golden Square Jewelry store in Yonkers at roughly 5.30pm on Thursday.

Cops are nevertheless hunting for a fourth unidentified suspect.

Alston and Long were charged with felony robbery, grand larceny, and burglary and were arraigned on Friday. Wilson was hospitalized after a vehicle crash and will be "charged in the near future."

Surveillance footage reveals two of them hitting the window with sledgehammers many times as two others come into frame. They make a small hole, shoving their hands inside to form a bigger one as they pulled loads of jewelry and gold out.

The other two join in by ripping off broken glasses and stealing the expensive items off the display before running off in a dark SUV, Yonkers PD reported.

A store employee can be caught running out onto the sidewalk, grabbing one of the discarded sledgehammers and running after the group. The SUV can be seen weaving through traffic, and seems to hit a parked car throughout its escape. The worker runs after them before giving up.

Police arrived on the scene several minutes later and discovered the vehicle in the Park Hill neighborhood. The four men led authorities on a short chase before the vehicle "crashed into a residential home retaining wall on Marshall Road," police announced in a statement.

The four men "abandoned" the car and "attempted to flee on foot."

"Two of the suspects were captured within minutes, and a third within an hour as they attempted to escape and conceal themselves in the wooded area adjacent to the Saw Mill River Parkway," Yonkers PD announced.

They proceed to search for the fourth suspect.

"The Yonkers Police Department offers no quarter to criminals who engage in this blatant, lawless, and violent behavior. We will commit every resource to track them down, arrest them, and hold them accountable," Yonkers Police Commissioner Chris Sapienza announced in a statement.

Meanwhile, Mayor Adams called for more assistance from the federal government and New Yorkers themselves to help crackdown on what he called the city’s latest crime scourge – ghost guns.

“I feel like I’m in an alternate reality. We’re probably the only civilized country that sends their troops into battle and we criticize them every day. That’s what we do,” a frustrated Adams announced to reporters Wednesday at the NYPD’s headquarters in Lower Manhattan, referring to 131 firearms on the table in front of him.