Watch: This Is Joe Biden Trying To Be Funny As He Reboots Liberal Kennedy Center Awards 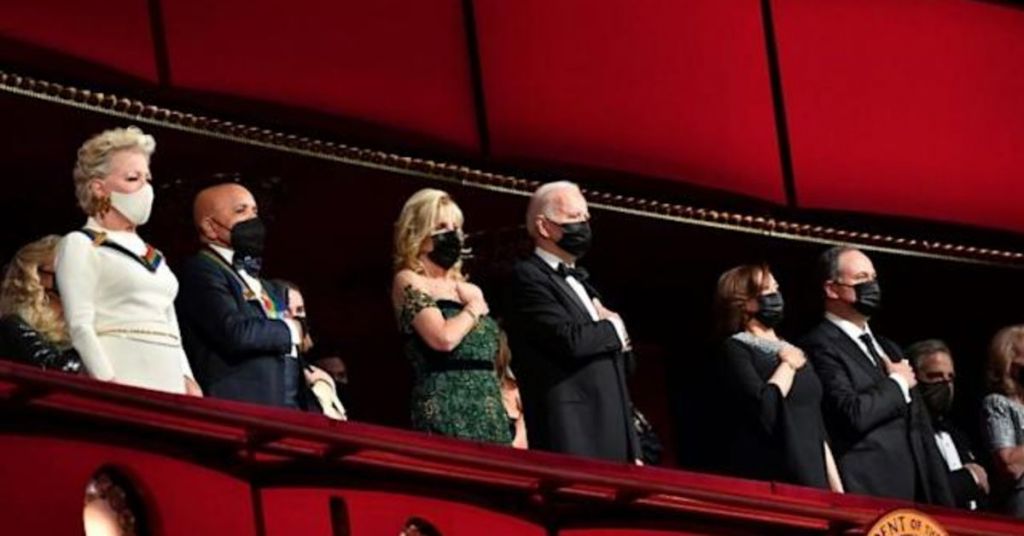 Comedian David Letterman took a swipe at former President Trump on Sunday night at the Kennedy Center Honors, remarking it was nice to see a president in attendance after Trump skipped the event during his tenure.

President Joe Biden, sitting in the presidential box overlooking the ornate theater, received a standing ovation at Letterman's words from the crowd of Washington D.C. social heavyweights and members of Congress.

'It's quite nice once again to see the presidential box being occupied,' Letterman declared in opening remarks for the 44th annual show.

'And the same with the Oval Office,' Letterman added to laughs as the applause died down.

The Biden couple's attendance at the Honors on Sunday night marks the first time in four years a president has attended Washington D.C. 's premiere social event after Trump refused to go in the face of criticism from the honorees.

The first year he skipped, President Trump publicly asserted that he wished to avoid marrying the celebration with a 'political distraction' after some of the honorees threatened to boycott the awards if Trump attended.

However, the ghost of the past president didn't haunt the entire ceremony as a slew of famous faces paid tribute to the five artists being honored in the gala's return to in-person performances.

In addition to the applause, President Biden was also the butt of a slew of jokes.

The camera panned to Biden, showing his presidential box, awake, laughing and clapping along.

Michaels was honored by Saturday Night Live alumni and present cast - including Kevin Nealon, Seth Meyers, Kristen Wigg, Amy Poehler, Kate McKinnon, Kenan Thompson, and Colin Jost - who paid tribute to his creation and his role in their careers.

'It's a bit intimidating to do jokes in front of the most powerful man in the world,' Jimmy Fallon declared during Michaels' tribute, adding to laughs 'and President Biden.'

Speaker Nancy Pelosi, speaking to reporters on the red carpet ahead of the show, insisted it was appropriate for Biden to attend the Honors Gala after the Trump years.

'It's something that should always be the case that the President of the United States would be recognizing the value of the arts,' she said.

She went on to declare that the arts are the 'most unifying force.'

In the taping of the show, which airs on CBS later this month, Letterman remarked it was not a night for politics, even as that topic was most prominently the underlying theme of the evening.