George Floyd Autopsy: “no physical findings that support a diagnosis of traumatic asphyxia or strangulation” Featured

A lot of people aren’t going to want to hear that.

The video of George Floyd pinned down on his stomach, hands cuffed behind him, with Officer Derek Chauvin pinning him down with a knee to the neck, is hard to watch. Among other things, Floyd pleads with the officers that he can’t breath.

From that video alone, there was near universal condemnation of the police, and a lot of punditry that the knee-to-the-neck pressure was the cause of death. The New York Times reported:

For police trainers and criminologists, the episode appears to be a textbook case of why many police departments around the country have sought to ban outright or at least limit the use of chokeholds or other neck restraints in recent years: The practices have led too often to high-profile deaths….

Criminologists viewing the tape said the knee restraint not only put dangerous pressure on the back of the neck, but that Mr. Floyd was kept lying on his stomach for too long. Both positions — the knee on the neck and lying face down — run the risk of cutting off someone’s oxygen supply.

The video sparked looting and rioting which now is spinning out of control in numerous cities.

I’ve not commented so far, because I’ve learned from covering numerous prior cases to wait for the evidence to come in before discussing criminal culpability. From what I’ve seen so far, it’s hard to understand or justify the actions of the police in pinning Floyd down for so long, or of putting a knee to the neck.

But criminal liability would require a causation element — that the conduct of the police caused the death.

So when the prosecuters did not immediate charge Chauvin despite the public pressure, I assumed that they were waiting for Medical Examiner findings to support causation. 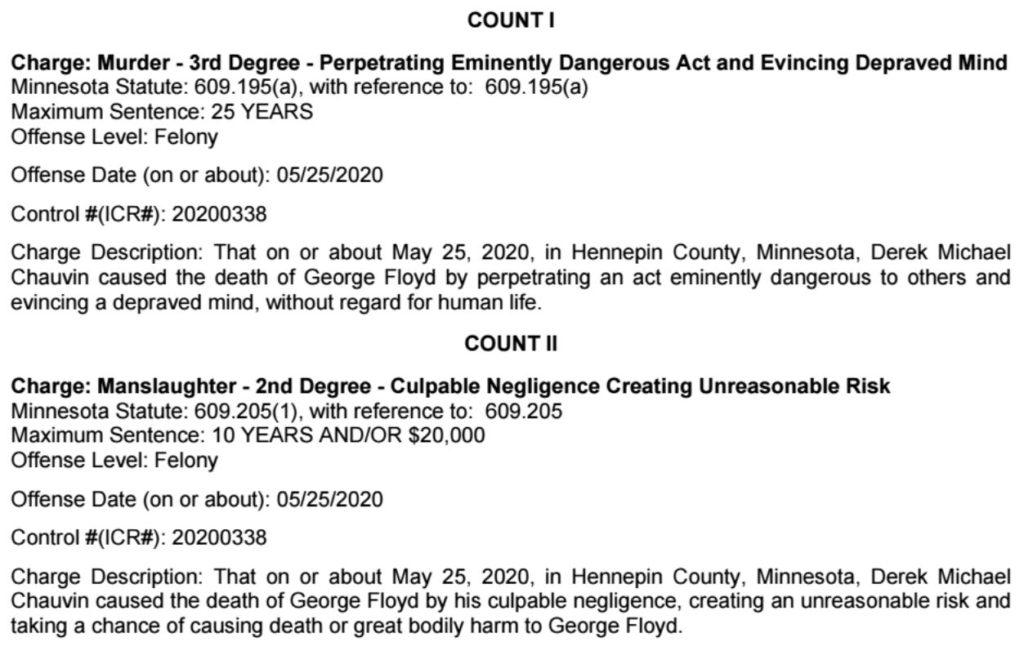 The Criminal Complaint filed againt Chauvin contains a section regarding the Medical Examiner’s preliminary findings. Those findings include that Floyd did not die from asphyxia or stangulation (emphasis added):

The Hennepin County Medical Examiner (ME) conducted Mr. Floyd’s autopsy on May 26, 2020. The full report of the ME is pending but the ME has made the following preliminary findings. The autopsy revealed no physical findings that support a diagnosis of traumatic asphyxia or strangulation. Mr. Floyd had underlying health conditions including coronary artery disease and hypertensive heart disease. The combined effects of Mr. Floyd being restrained by the police, his underlying health conditions and any potential intoxicants in his system likely contributed to his death.

The defendant had his knee on Mr. Floyd’s neck for 8 minutes and 46 seconds in total. Two minutes and 53 seconds of this was after Mr. Floyd was non-responsive. Police are trained that this type of restraint with a subject in a prone position is inherently dangerous.

These Medical Examiner findings explain why no intentional murder charge was asserted: The intentional act of Chauvin putting his knee on Floyds neck did not cause the death in itself. It was, according to the prosecution, the act of holding Floyd down given his pre-existing medical condition and “potential intoxicants.”

Not surprisingly, the Floyd family has hired Dr. Michael Baden to perform a private autopsy.

Other videos have emerged showing Floyd led to the car without any obvious struggle, and of other officers joining Chauvin in holding Floyd down. What is missing from the videos is how Floyd came to be pinned down. But the Criminal Complaint provides this explanation that Floyd was resisting getting in the police car:

The officers made several attempts to get Mr. Floyd in the backseat of squad 320 from the driver’s side. Mr. Floyd did not voluntarily get in the car and struggled with the officers by intentionally falling down, saying he was not going in the car, and refusing to stand still. Mr. Floyd is over six feet tall and weighs more than 200 pounds.

While standing outside the car, Mr. Floyd began saying and repeating that he could not breathe. The defendant went to the passenger side and tried to get Mr. Floyd into the car from that side and Lane and Kueng assisted.

The defendant pulled Mr. Floyd out of the passenger side of the squad car at 8:19:38 p.m. and Mr. Floyd went to the ground face down and still handcuffed. Kueng held Mr. Floyd’s back and Lane held his legs. The defendant placed his left knee in the area of Mr. Floyd’s head and neck. Mr. Floyd said, “I can’t breathe” multiple times and repeatedly said, “Mama” and “please,” as well. The defendant and the other two officers stayed in their positions.

The officers said, “You are talking fine” to Mr. Floyd as he continued to move back and forth. Lane asked, “should we roll him on his side?” and the defendant said, “No, staying put where we got him.” Officer Lane said, “I am worried about excited delirium or whatever.” The defendant said, “That’s why we have him on his stomach.” None of the three officers moved from their positions.

If you think a guilty finding is a given, then you haven’t followed police use of force cases. The police defendants in the Rodney King case took a video that seemed to make conviction a certainty, and tore it apart second-by-second to argue that the use of force was justified

In a frame-by-frame analysis of the videotape, expert witness Sergeant Charles Duke backed up Koon’s contention that only reasonable force was used against King. Duke, a critic of LAPD policy banning use of chokeholds, suggested that the King incident showed the inevitable result of a policy that left the police with few viable options short of deadly force. Duke said it was sometimes necessary “to break a bone” and that every one of the fifty-six baton swings shown on the videotape was justified.

The not guilty finding triggered riots, as will a finding of not guilty if Chauvin escapes conviction.

We don’t have all the evidence yet, so we don’t know what the defense will be. Except we know from the Medical Examiner’s that at least part of the defense for Chauvin will be that he did not cause the death with his knee, and could not reasonably have know of Floyd’s medical condition.

I think John Hinderaker has it right:

It may be that when all the facts are in, we will conclude that George Floyd died as a result of negligence on the part of Minneapolis policemen. If so, there will be plenty of time for an accounting. But today’s disclosure of the Medical Examiner’s preliminary findings reminds us why lynch mobs have always been a bad idea, and calls for overnight justice are nearly always misguided.