Charging that so-called "sanctuary" cities that protect illegal immigrants are jeopardizing national security, Attorney General Bill Barr announced a slew of additional sanctions that he called a "significant escalation" against left-wing local and state governments that obstruct the "lawful functioning of our nation's immigration system.

"The department is filing a complaint against the State of New Jersey seeking declaratory and injunctive relief against its laws that forbid state and local law enforcement from sharing vital information about criminal aliens with DHS," Barr said.

That was a reference to New Jersey Attorney General Law Enforcement Directive 2018-6, which the DOJ says illegally bars officials from sharing the immigration status and release dates of individuals in custody. It also requires New Jersey law enforcement to “promptly notify a detained individual, in writing and in a language the individual can understand” if Immigration and Customs Enforcement (ICE) files an immigration detainer request for the individual.

"We are filing a complaint seeking declaratory and injunctive relief against King County, Washington, for the policy ... that forbids DHS from deporting aliens from the United States using King County International Airport," Barr continued.

"Further, we are reviewing the practices, policies, and laws of other jurisdictions across the country.  This includes assessing whether jurisdictions are complying with our criminal laws, in particular the criminal statute that prohibits the harboring or shielding of aliens in the United States," Barr added, noting that the DOJ would support DHS with "federal subpoenas to access information about criminal aliens in the custody of uncooperative jurisdictions."

And, Barr said, "we are meticulously reviewing the actions of certain district attorneys who have adopted policies of charging foreign nationals with lesser offenses for the express purpose of avoiding the federal immigration consequences of those nationals’ criminal conduct.  In pursuing their personal ambitions and misguided notions of equal justice, these district attorneys are systematically violating the rule of law and may even be unlawfully discriminating against American citizens."

Sanctuary cities, Barr said, are defined as those with policies that allow "criminal aliens to escape" federal law enforcement -- and some jurisdictions are becoming "more aggressive" in undermining immigration authorities, with some local politicians develop "schemes" to circumvent immigration officials.

"The express purpose of these policies is to shelter aliens whom local law enforcement has already arrested for crimes," Barr said, noting that the Constitution empowers the federal government to enforce immigration laws, even as it entrusted the police power to the states. "This is not lawful or sensible."

"The Founding Fathers carefully divided responsibility and power between the federal government and the state governments," Barr said. The 'Supremacy Clause' in Article VI of the Constitution provides that the 'Constitution, and the laws of the United States which shall be made in pursuance thereof… shall be the supreme law of the land.'"

He added: "This Clause is a vital part of our constitutional order.  Enforcing a country’s immigration laws is an essential function of the national government.  And no national government can enforce those laws properly if state and local governments are getting in the way.  While federal law does not require that 'sanctuary jurisdictions' actively assist with federal immigration enforcement, it does prohibit them from interfering with our enforcement efforts." 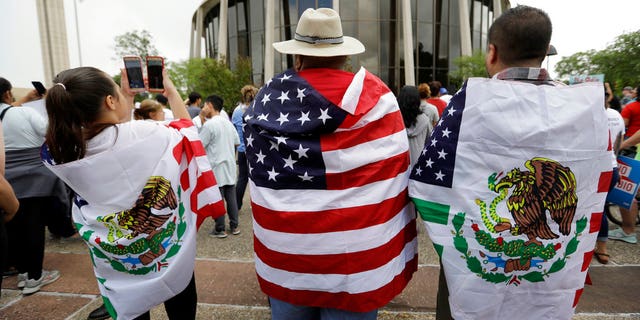 Barr emphasized that there is no way to determine how many "criminal aliens" are in the U.S., although recent estimates under the Obama administration put the number as high as 2 million.

"Assuming that estimate was accurate, the numbers are likely even higher today despite the Trump Administration’s consistent and concerted efforts to find and deport this criminal population," Barr said.

He added that "it is the rule of law that is fundamental to ensuring both freedom and security," saying law enforcement officers are increasingly under fire in "heinous" attacks that "come against the backdrop of cynicism and disrespect for law enforcement."

Watch: Ted Cruz Goes Off On Dems, Explains Why SCOTUS Pick Is Important

'Too Big To Blame': Multi-Million Dollar Price-Fixing Scam Blamed On Only 6 Amazon Employees

Barr touted the DOJ's lawsuit against California and other states over their sanctuary policies. The suit over California involves the law prohibiting the federal government from conducting operations in its own affiliated private immigration facilities and detention centers.

"The department sued the State of California to enjoin numerous state laws that attempted to frustrate federal immigration enforcement," Barr said. "We prevailed on several of our claims in the lower courts, and we are hopeful that the Supreme Court will grant our request to review the remaining issues and side with us against California’s obstructionist policies."

Barr's new sanctions come as the Trump administration has already announced other initiatives targeting illegal immigration in the wake of the president's State of the Union address last week.

Barr slammed the law in his speech Monday, calling it "unlawful."

Customs and Border Protection (CBP) Assistant Commissioner, Office of Field Operations Todd Owen later told Fox News that up to 800,000 New Yorkers could be affected by the rule change within the next five years. Owen said people with pending Global Entry applications would be refunded, and that those with active applications would not be affected until their renewal date.

Illegal immigrants rushed to New York Department of Motor Vehicles (DMVs) in large numbers after the "Green Light Law," which allowed them to obtain driver's licenses or learner's permits regardless of their immigration status, took effect last December. The law also permitted applicants to use foreign documents, including passports, to be submitted in order to obtain licenses.

In a letter to top New York state officials obtained exclusively by Fox News, Wolf noted that the New York law prohibited DMV agencies across the state from sharing criminal records with Customs and Border Protection (CBP) and ICE.

"This Act and the corresponding lack of security cooperation from the New York DMV requires DHS to take immediate action to ensure DHS' s efforts to protect the Homeland are not compromised," he said.