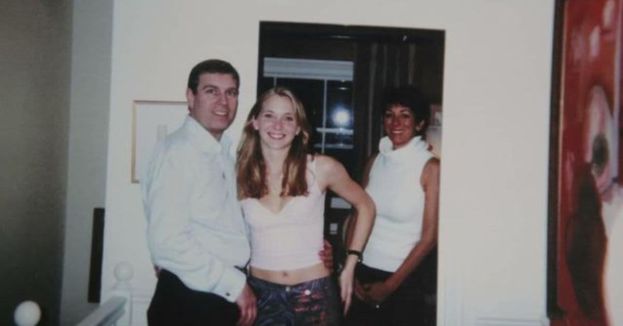 Ghislaine Maxwell, the infamous convicted sex trafficker, alleged in her first interview from jail that she believes a well-known photo of Prince Andrew and Virginia Giuffre in her home from 2000 is likely a fake.

She says that she has no memory of the pair ever meeting.

British broadcaster Jeremy Kyle was interviewing her as she is actively serving a 20-year sentence in Florida for her role in helping Jeffrey Epstein sexually exploit and abuse underage girls.

Her full interview is set to be aired on TalkTV on Monday. There were already some teasers of the interview that were released. In those teaser clips, Maxwell speaks about Epstein.

Maxwell said the following: “I feel completely divorced from the person that people reference and talk about, and all the various newspaper articles and TV shows and podcasts.”

She described the Duke of York as a dear friend of hers. She said that he should be “uplifted.”

She spoke about how Giuffre has taken back claims of being sexually assaulted. Maxwell said:

“I have no memory of them meeting, and I don’t think that picture is real,” and “There is no original of that photo, [only] copies of it that have been produced, copies of copies. According to some experts, part of it looks like it has been photoshopped.”

“I don’t remember her in my home. I know that Virginia traveled with Jeffrey, so it’s entirely possible. But the photo doesn’t appear to be real, and I don’t recall it being taken.”

She continued by saying that she knew the photo was fake and denied that the pair were ever in her home. She pointed out that she has only ever seen a photocopy of the image that everyone refers to. She said that she had never seen an original of this photograph in her life.

The Telegraph reported on Sunday that Prince Andrew is already looking at legal options to overturn the $12 million settlement that he previously agreed to with Giuffre. Previously, Giuffre alleged that Prince Andrew raped her three times in 2001 when she was 17 years old. She filed a lawsuit against him in August 2020, and it was reported that the Royal Family told the Prince to settle the case quickly to minimize the damage that a story like this could cause.