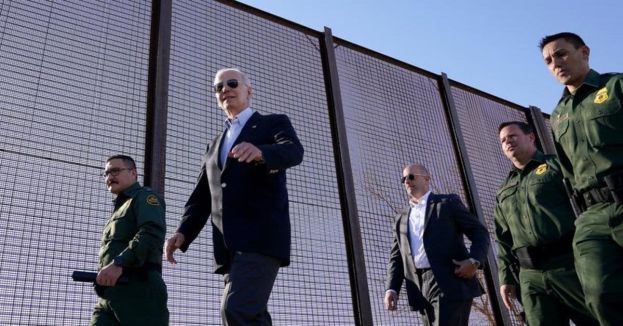 The left would have you believe that the people pouring over the southern border are refugees from oppression and economic calamity who want a better life in the United States.

However, as Fox News points out, some “refugees” are coming to America for a far darker purpose.

Arrests of individuals on the terror watch list have skyrocketed since Joe Biden became President of the United States. Bill Melugin, a correspondent for FNC, laid out the grim statistics in a Tweet.

“Terror watchlist arrests at the southern border are surging under President Biden.

“Per CBP sources, there have been approximately 1.2 million *known* gotaways since Biden took office.”

Biden has presided over such unprecedented levels of illegal immigration that even Democrats have started to complain. Mayor Eric Adams of New York has noted that his city’s services have been overwhelmed by illegal migrants, many bussed from Texas by Governor Greg Abbott. He has called on President Biden to do something about the growing catastrophe being visited on his formerly sanctuary city.

While Biden first visited the southern border in early January as President, in an area sanitized of migrants who had been sleeping in the streets, Border officials have termed his action “too little, too late.” The White House continues to assert that the surge in illegal immigration is typical, but statistics contradict that idea.

In the meantime, some Republicans have decided to do more than complain. According to the Daily Wire, Rep Pat Fallon, R-Texas, has filed articles of impeachment against Homeland Security Secretary Alejandro Mayorkas.

Fallon stated, “Since day one, Secretary Mayorkas’ policies have undermined law enforcement activities at our southern border. From perjuring himself before Congress about maintaining operational control of the border to the infamous ‘whip-gate’ slander against our border patrol agents, Secretary Mayorkas has proven time and time again that he is unfit to lead the Department of Homeland Security.

“His willful actions have eroded our immigration system, undermined border patrol morale, and jeopardized American national security. He has violated the law and it is time for him to go.”

House Speaker Kevin McCarthy called Mayorkas to resign and suggested that impeachment would be an option. So far, neither Mayorkas nor Biden has commented on the impeachment threat.