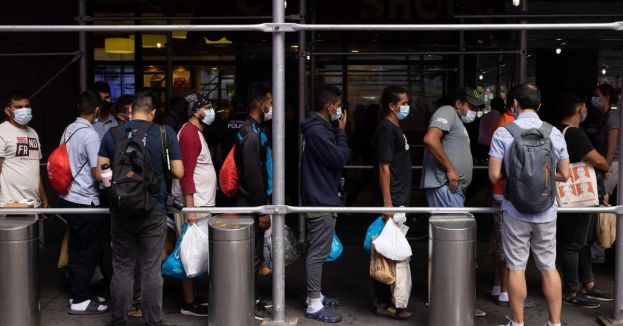 Mayor Adams of New York City is set to open yet another mega-migrant housing center in the city, according to the New York Post.

The new facility will have views of the Statue of Liberty and the New York Harbor. According to Mayor Adams, it will also be possible to have up to 1,000 adults housed in this arena simultaneously.

This Humanitarian Emergency Response and Relief Center will open at the Brooklyn Cruise Terminal in Red Hook sometime this week, according to reports obtained by the Post. This will be the fifth such center that the city has opened in response to the influx of migrants.

Mayor Adams said, “Our city is at its breaking point,” regarding the migrant crisis hitting the Big Apple.

Kevin Cho of the Mayor’s Office of City Legislative Affairs to City Council members wrote a letter about the situation that was obtained by the Post. The letter read in part:

“Once open, this site will serve approximately 1,000 asylum seekers in a congregate setting and will offer the same services adult men have been receiving at the other humanitarian relief centers, including on-site medical, food, laundry, and reconnection.”

The New York Post reports that more than 41,000 migrants have come through New York City since June. This is putting many parts of New York City at a breaking point, and many residents are curious about how they will continue to go on with life as usual with a situation like this pressing down on them.

Things have gotten so desperate that Mayor Adams has floated some bizarre ideas about how to house migrants in New York City in the past. Some of his ideas about how to help with this are highly controversial and primarily thought of as being too far outside the norm to truly appeal to most New Yorkers. For example, the Mayor suggested potentially housing migrants on cruise ships at one point.