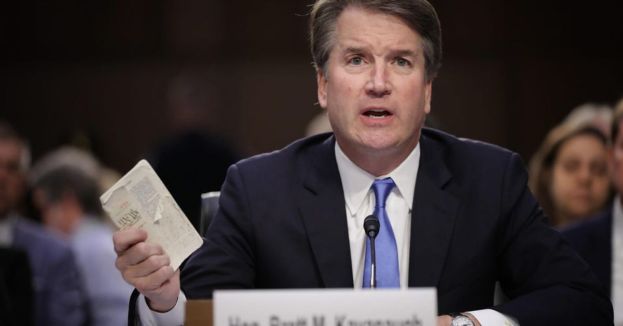 On the 50th anniversary of the Roe v. Wade ruling, which legalized abortion in the United States, protesters gathered outside of the home of Supreme Court Justice Brett Kavanaugh.

According to The Daily Signal, a conservative news outlet, the demonstrators were primarily composed of far-left activists who opposed Kavanaugh's conservative views on reproductive rights. The report states that the protesters "chanted slogans and held signs calling for Kavanaugh's impeachment and for the overturning of Roe v. Wade."

The report quotes one protester as saying, "Justice Kavanaugh's views on reproductive rights are a threat to women everywhere. He must be held accountable for his actions."

Justice Kavanaugh was confirmed to the Supreme Court in 2018, following a contentious confirmation process in which he was accused of sexual assault. He has since been a reliable vote for conservative causes and was part of the majority in cases such as June Medical Services LLC v. Russo and Little Sisters of the Poor v. Pennsylvania.

The protests outside of Justice Kavanaugh's home are the latest in a series of demonstrations by far-left activists targeting the homes and workplaces of conservative politicians and figures. These actions have been criticized for being aggressive and intimidating and for crossing the line from peaceful protest into harassment.

It is important to note that the U.S constitution guarantees the right to peaceful protest and freedom of speech, but it is also important for individuals to respect the privacy and safety of others. The U.S. Supreme Court, and its Justices, play a vital role in interpreting the constitution and upholding the rule of law.

As the nation marks the 50th anniversary of the landmark decision, it is clear that the issue of reproductive rights continues to be a polarizing and contentious issue, with activists on both sides of the political spectrum continuing to push for their respective positions.