Selfless And Clever: See Why Buffalo Man Is Being Hailed A Hero For Rescuing 25 People From Blizzard 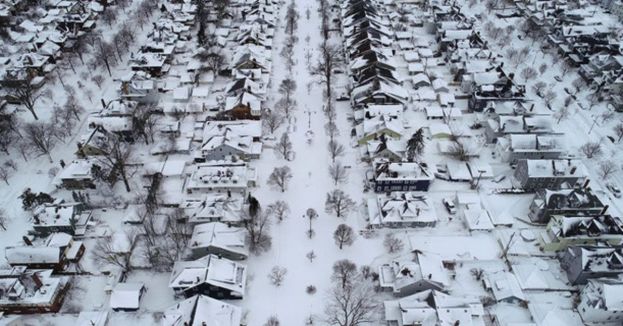 Fox News reports the winter storm that swept over Buffalo resulted in a hero stepping forward to save several lives.

The man police are searching for is being called ‘Merry Christmas Jay’ because of a note left at a Buffalo-area school. According to the Fox News report, on December 23, a man broke into the school by breaking a window to bring in several people and two dogs so that they would be safe during the horrendous winter storm.

A keyholder at the school had been alerted to the break-in that Friday evening, but police could not respond quickly because of the bad weather. When a police officer could finally access the school later during the weekend, he found the note signed with "Merry Christmas Jay."

Jay wrote, “To whom it may concern, I’m terribly sorry about breaking the school window and breaking into the kitchen. Got stuck at 8 p.m. Friday and slept in my truck with two strangers, just trying not to die. There were 7 elderly people also stuck and out of fuel. I had to do it to save everyone and got them shelter and food, and a bathroom. Merry Christmas, Jay.”

Police from the Cheektowaga Police Department accessed surveillance footage from the Pine Hill School and said they “witnessed people taking care of people.” “There was a freezer full of food, but no one touched it. They only ate what was necessary to stay alive. They used the gym for the kids to play and pulled the smart boards out of the classrooms to watch the news for updates.”

The police also noted, “They had 2 dogs they were also attending to. When they were finally able to leave safely, you never would have known anyone was there.”

While the police are searching for ‘Merry Christmas Jay,’ it isn’t so he can be charged with any crimes. The police want to say ‘thank you’ for the selfless actions he took upon himself that most likely saved the lives of several people and their two dogs from the brutal conditions of the winter storm.