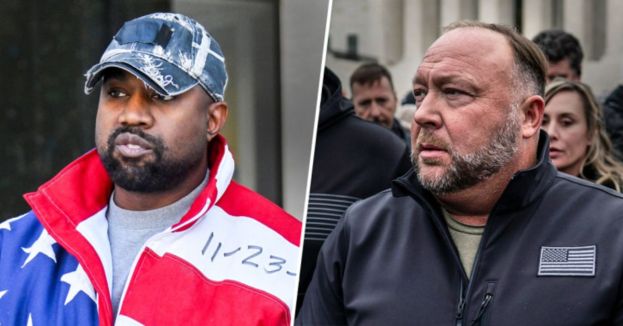 Alex Jones has finally broken his silence about Ye.

It was a controversial headline that made the news, and now we’re finally hearing from Alex Jones. Read on to learn more about what he said during the epic interview with Steven Crowder.

The podcast starts by talking about several things, including transgender issues. Crowder details what testosterone does to benefit people, such as helping with healing from bone injuries. He goes on to point out the behavioral benefits, too.

The podcast discusses controversial topics, such as Russian President Vladimir Putin and the Hunter Biden laptop. They hilariously reference testosterone levels throughout the podcast. Then, they finally brought on Alex Jones. You can fast forward to the fifty-minute mark to see this podcast portion.

It starts with Ye’s controversial statements saying he loves Jewish people and Nazis, and Hitler. He further states that the facts of the Holocaust are inaccurate. This interview appeared on InfoWars on December 1.

Then, we hear from Alex Jones regarding his response to that interview. Interestingly, Jones stated that he didn’t tell Ye what he could talk about during the interview. However, according to the podcast, he said he wanted to talk about real issues, such as human trafficking, and to try to bring people together. Jones said, “I thought he was joking at first.”

Jones went on to talk about the interview. He says he “saw it as a giant trolling operation.” He told Ye said he was “super high on adrenaline when he did it.”

Alex Jones also pointed out that he brought up real, historical facts about the Nazis because Ye doesn’t seem to know what happened during WWII. However, according to the InfoWars star, he could barely get a word in edgewise.

That wasn’t his intention at the interview. Going into it, Alex Jones said he figured he could let Ye get out what he needed to and then move on. Jones, bless his heart, wanted the world to see a different side of Ye, such as his intellectual side. He said he had several topics he wanted to touch on, but that didn’t happen.