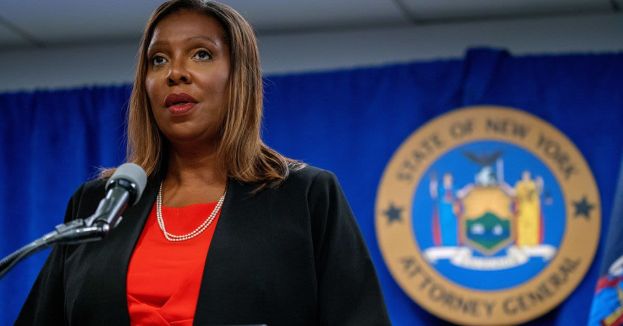 The Chief of Staff for New York’s Letitia James is resigning over serious allegations.

Ibrahim Khan swears that the claims aren’t valid but is no longer employed as the investigation continues. Why is this Chief of Staff so nervous if the allegations aren’t backed by evidence?.

Fox News reports, “The New York Times reported that Ibrahim Khan was accused of inappropriate touching and unwanted kissing by at least one woman. James has reportedly hired a law firm to investigate the allegations.”

The office of Letitia James issued a statement. They didn’t mention Kahn by name, but the message was clearly about him.

Per Fox News, “‘The Office of Attorney General has protocols in place to thoroughly investigate any allegation of misconduct,’ James’ office said in a statement without naming Khan. ‘The office takes these matters seriously, and this situation is no different. An independent, impartial investigation was conducted, and the employee has since resigned.’”

WATCH: THIS IS A BOLD CRIMINAL MOVE: DRIVING CAR INTO MALL

Khan swears that the accusations are unfounded and claims that his resignation has nothing to do with the allegations. Per the Daily Mail, “‘I’ve been slated to leave the office for the private sector at the end of this year,’ he said in the statement, claiming his departure was tied to the end of James’ first term.”

WATCH THESE CREATIVE EDITS OF VP HARRIS COMMENTING ON HER IDENTITY

The statement continues, “‘This is unrelated to an investigation which, nevertheless, found no official workplace misconduct,’ adding he ‘is proud of all we have achieved over these past four years in serving New Yorkers.’”

However, that’s not the story we’re hearing from everyone. According to Fox News, “One of the women who filed a complaint was told on Friday that her allegation of inappropriate touching and unwanted kissing had been substantiated, the Times report said.”

Khan has been on the scene for quite some time. He worked on James’ campaign in 2013. Before that, he worked with Hillary Clinton in 2008. Unsurprisingly, this Democrat used to work with the Clintons.

When A Bible Verse Turns DEADLY: This PA...

What Happened To Protecting Our Kids? Th...