What A Joke: Biden BLASTED By Both Sides For This BIG 'Oopsie' At WH Dinner 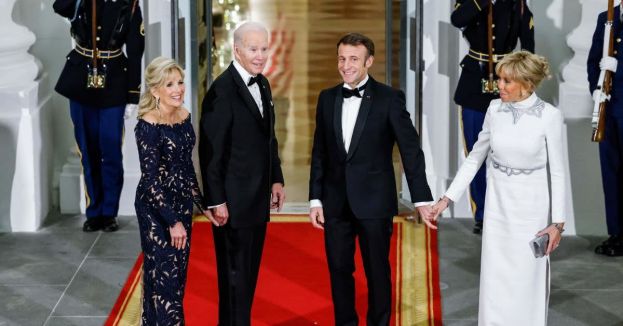 Ordinarily, a fancy White House state dinner menu would not be controversial.

However, the Biden Administration has been, if nothing else, creative in the controversies that it has created for itself. Just the News explains how the inclusion of 200 Maine lobsters is causing both sides of the aisle to erupt in anger.

“Rep. Jared Golden, D-Maine, called out Biden on Twitter, suggesting the President is a hypocrite for crushing the lobster industry with strict regulations while purchasing 200 lobsters from Maine for the state dinner with Macron.

“’If the Biden White House can prioritize purchasing 200 Maine lobsters for a fancy dinner, @POTUS should also take the time to meet with the Maine lobstermen his administration is currently regulating out of business,’ Golden wrote on Twitter.”

At issue, according to Fox News, is the perceived threat that environmentalists believe lobster fishing has to the North Atlantic Right Whales. Environmentalists have accused lobster fishermen of entangling the endangered whales in the fishing gear they use to harvest lobsters.

While the Biden Administration contemplates harsh regulations that may end the Maine lobster industry, Whole Foods has already announced that it will no longer sell Maine lobsters in its stores. Maine politicians, including Gov. Janet Mills, Sens. Susan Collins and Angus King and Rep. Chellie Pingree, have denounced the decision on a bipartisan basis.

Golden did not mince words at what he views as a Biden betrayal of Maine lobstermen. “In 2020, while running for President, Biden pledged ‘I will work to protect the livelihood and safety of the fishing community’ in reference to lobstermen. He has yet to take a single action to make good on that pledge.”

“’You cannot espouse being a President for working people while simultaneously overseeing the destruction of an entire blue-collar fishery and its community’s heritage and way of life,’ he added. ‘I implore you to recognize and oppose these proposed right whale conservation measures and to meet with Maine’s congressional delegation as well as leaders of the lobster community to find common sense solutions to ensure that Maine’s lobster and fishing industries and the right whales will survive for generations.’”

Ironically, the Maine lobster industry has enjoyed a boom in recent years. The industry enjoyed its most prosperous year in 2021.