WATCH These Unhinged Maniacs: "Protestors" Harass Conservative Speaker At College And Then This Happens... 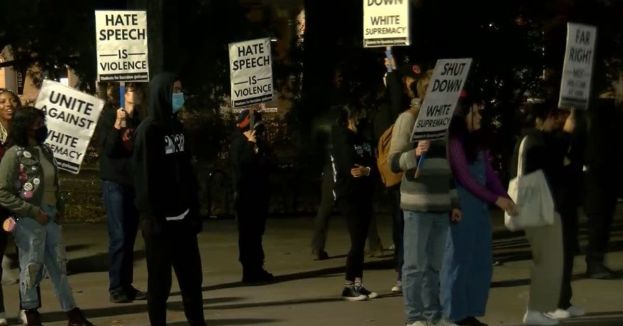 Charlie Kirk, the President of Turning Point USA, organized a voluntary event to discuss the Constitution.

The event was held at the University of New Mexico-Albuquerque. Although it was voluntary and focused on the Constitution, it necessitated a visit from the riot police.

The Washington Examiner reports, “Kirk captured his “welcoming committee” on campus in a video he shared on Twitter. The video showed the barricades around the building where he was speaking that night. Protesters are heard chanting “f*** Charlie Kirk” and “get the f*** off our campus.” Similar protests had led to other conservative speakers like Tomi Lahren and Ian Haworth getting their events canceled.”

The event continued despite the angry rants from protestors. Kirk showed his sense of humor when he referred to them as his fans and waved at them from a balcony. However, the protestors did not settle down.

The Washington Examiner says, “Eventually, New Mexico state police sent their emergency response team in riot gear to clear the protesters from the plaza near the building. Protesters clashed with them, pushing back when authorities directed them away. Others can be heard calling them ‘f***ing a**holes," "f***ing cowards," and "p***ies.’"

One student defended the protest when speaking with the police. Fox News states, “One UNM student, Leandro Pita, told a New Mexican NBC affiliate that Kirk represents hate and White supremacy and should not have been allowed to have an event.”

While many are quick to point the finger at the Proud Boys and other organizations, the leftist people who protested were leftist organizers who had no respect for the police. However, Charlie Kirk was invited to campus by a student organization. He had as much of a right to be there as anyone.