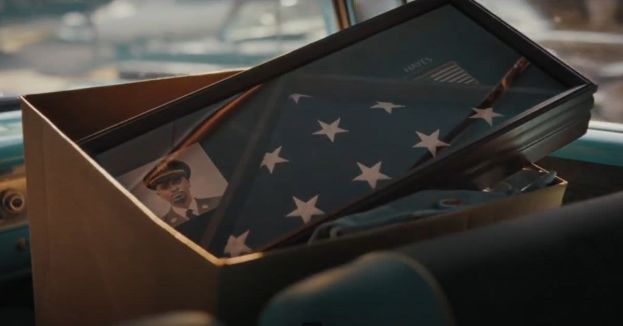 U.S. automaker Chevrolet is going against the grain of weakness by creating a traditional Christmas commercial for the holiday season. Breaking form from other companies, Chevy decided that it won't promote the conservative values of family and patriotism.

The commercial they created is titled "Mrs. Hayes," It opens with the scene of an elderly widow struggling to get her 1957 Chevy Bel Air started as she is stranded in a parking lot.

She tries to urge the vehicle to start by bargaining with it to please start, but it is to no avail. She looks into the vehicle's rearview mirror, and a flood of memories from her life comes rushing back to her.

The Western Journal reports that one of the memories that come back to her is an image of her dropping off her husband, dressed in a military uniform, as he prepares to head to Vietnam. In another memory, we see a shaken Mrs. Hayes carrying a box containing an American flag and what is implied to be the remains of Mr. Hayes.

Other scenes in the commercial show Mrs. Hayes becoming a maternal figure to neighborhood children. She never remarried after Mr. Hayes, but she found purpose by providing the maternal figure many neighborhood children needed. One of the boys in the memory is named Billy. Years later, in the memories, Billy's pregnant wife comes knocking on Mrs. Hayes' door in a panic. Mrs. Hayes takes the woman in her 1957 Chevy vehicle to the hospital.

Then, we return to the present with Mrs. Hayes interrupted by a light knocking on the window of her vehicle. It's Billy, and he offers to return her home in his brand new 2024 Red Electric Chevy Blazer SUV.

Finally, Mrs. Hayes is seen alone in her home decorating for Christmas. There is a knock on the door. She opens it and is greeted by Billy's daughter, who jumps into her arms.

The widow is seen wiping tears from her eyes as she is joyous to have people to celebrate the Christmas holiday with. Billy hugs her and says, "Merry Christmas Mrs. Hayes."

The Western Journal reports that many people have heaped praise on the ad on YouTube, where it can also be viewed.