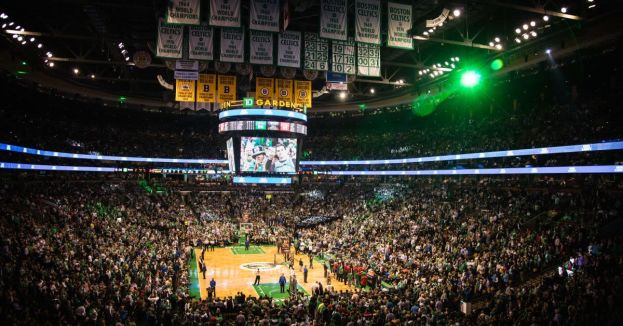 Prince William and Kate Middleton were mocked at a recent Boston Celtics game they attended.

They sat courtside at the game as part of their quick trip through Boston. However, the New York Post reports that when the cameras turned on the couple, the crowd booed them and burst into mocking chants of "USA! USA!".

This was the first stateside visit for the royal couple since 2014, and they quickly got to a basketball game just hours after landing in Boston. Boston Celtics fans seemed less than eager to give them a warm welcome. The chants of "USA! USA!" were meant in a mocking sense.

Numerous videos of the situation spread throughout social media as fans were eager to make their opinions about these royals known to the world.

Several jokesters online took the opportunity to make jokes, reports the New York Post. One of those jokesters said the following:

"What was the Point of Dumping the Tea in the Harbor if you're just going to invite the Royals to a Celtics game 249 years later…."

ITV NEWS' royal editor Chris Ship said that part of the royals' reception was so chilly because of the solid Irish connections that the Boston Celtics have. Differences between Irish roots and those who support the British royal family date throughout history.

Despite the reception by some fans in the arena, others did reach out for handshakes and selfies with the famous couple.

The couple is expected to make many charity stops in the country before meeting with President Biden on Friday. They are also expected to present the Earthshot Prize at a gala.

The two are already off to a shaky start on US soil. It might be complicated further by releasing a trailer for an upcoming Netflix documentary by Prince Harry and Megan Markle. Tensions seem to remain high between the brothers regarding their status as royals.