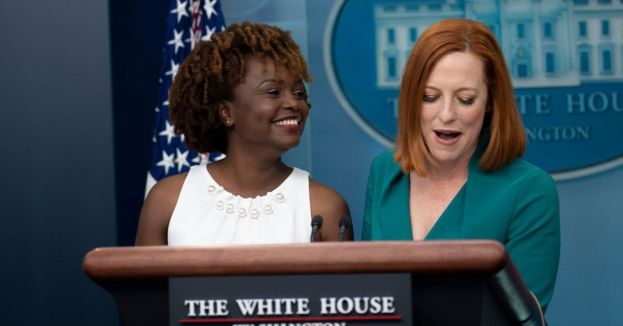 White House Press Secretary Karine Jean-Pierre had many verbal stumbling during her briefing on Monday that reporters noticed in the room.

It reminded many people of the verbal gaffes that President Biden himself frequently makes, and it had some shaking their heads, thinking that those near the President also seem to have caught his habit of verbal errors.

The Western Journal reports that the Press Secretary said the following from the podium referring to Biden's schedule:

"The president is restarting an important tradition that just like — just like he does for winning sports teams, as you have seen him do in the past 20 months or so, the president meets with U.S. winners of the Nobel Prize."

None of this would have been so bad if not for the fact that she mispronounced the word "Nobel" repeatedly. She had numerous opportunities to get it right and failed every time.

She kept pronouncing it the same way that one would say "noble." They are spelled similarly and sound somewhat alike, but the two terms are not the same and refer to vastly different things. Thus, the White House must feel like it has an egg on its face after this one.

The people they hire to speak directly to the press should be able to deliver those words with authority. Instead, they continue to say things that embarrass the White House and make many who work there look rather foolish.

There are plenty of times when Biden has stumbled over easy words, showing that there is something about this administration that can't get it right.