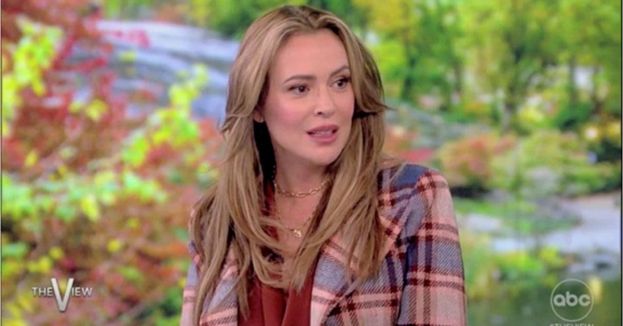 Actress Alyssa Milano announced on Tuesday that she would remain on Twitter in what she views as a heroic stance.

She says that she doesn't want to "cede territory" as far as getting off of the social media website. Fox News reports that she talked about her stance to stay on the platform on "The View.".

Co-host Sunny Hostin asked Milano about how she felt about Elon Musk's takeover of Twitter and what her response would be. That is when she commented about remaining on the platform to not "cede ground."

Whoopi Goldberg, also a host on the show, said that she did not agree with that point of view.

Fox News reported that Milano said the following on "The View":

"If we're not representing our side of, of the political discourse, aren't we just saying, you know what you can have Twitter,"

Goldberg stuck by her position and stated there was no way to redeem the platform at this stage.

"I'll tell you, some things you have to walk away from until you can get the control you need of it. Right now there's no way to get this control. And so find the ones that you can get and fix and then come back and run that run over,"

In November, Goldberg announced that she was bailing out the platform after Musk took it over.

Many liberal activists and others have made public their decision to leave Twitter. Many of them have received some overdue mocking for the fact that they are making such a big deal out of their personal choice to no longer spend time on the platform. At least some of these activists believe that their choice to leave the platform should impact people more than it has at this point.

Some are even taking it a few steps further. Milano announced she was ditching her Tesla car and switching to a Volkswagen vehicle instead. Again, she thinks that everyone should care about which types of vehicles she opts to drive. It must be such a disappointment to her to learn that people truly don't care as much as she must think that they do about the type of vehicle that she drives.

Given all of this, it is no surprise that many on the political right are dunking on liberals who feel they are as important as they think.