Watch: MASSIVE Lockdown Protests Arise In China As Calls For Xi-Jinping To Step Down Heat Up 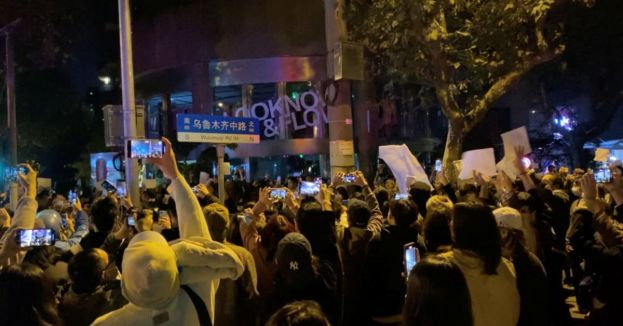 The Chinese government might have bitten off more than it can chew with its so-called "zero COVID" policies.

These policies throughout the country were designed to prevent any cases of COVID from breaking out among the population. To try to reach this goal, the regime has resorted to brutal crackdowns on its people for doing even the most routine tasks. Finally, the Chinese people are getting fed up with it.

The Daily Mail reports that protests have:

"erupted in at least seven cities - including Shanghai, Nanjing and Guangzhou - with violence breaking out between local cops and furious protesters."

Social media posts have shown the West that the protests are real and growing. Videos shared on social media show protestors shouting things such as "down with the CCP" and "take down Xi Jinping."

The CCP has sometimes responded to the unrest with arrests and even violence.

"The protests in Shanghai are taking place right down the street from the US Consulate Not a single official or member of the Biden Admin has said a word about them."

Shanghai has been the largest source of protests so far. It has a population of roughly 26 million people, and plenty of those people are highly frustrated by the restrictions they have faced for a long time under the Communist Party in the country. They are fed up with COVID restrictions overall and stand up to say that they won't stand for it any longer. It is the kind of push that might get the CCP to do something about the brutal crackdowns it has pushed on its people.

The Fort Worth Star reported that hundreds of protestors in certain Chinese cities were dispersed by pepper spray sent into the crowd by law enforcement.

China's super strict zero Covid policy means that anyone in the country that tests positive for the illness must be taken away from all other isolated people. The isolation is forced upon them, and the restrictions can be extremely brutal. Finally, the people there have had enough of this as the country heads into nearly three years of these strict policies.

Several of the ongoing protests were spurred on by the deaths of 10 people in an apartment complex in China. Those individuals were sealed in to try to prevent the spread of COVID. However, when a fire caught in the building, the people could not get out of the building and perished. Many in the crowd are extremely angry about this fact.