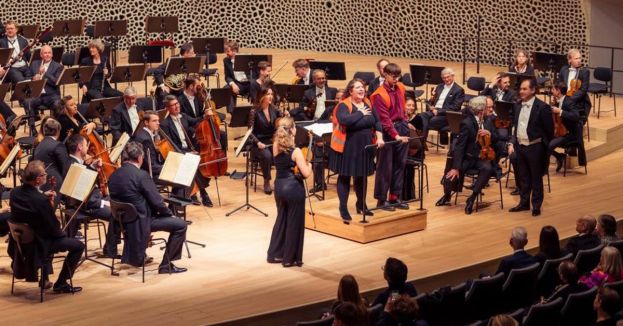 A report from The Gateway Pundit covers the latest attempt by Last Generation activists intent on bringing to light the issue of climate control.

According to The Sunday Times, two unidentified extremists entered the upscale concert hall just a few minutes before the state orchestra in Hamburg, Germany, began to play Beethoven’s Violin Concerto in D major.

The pair made their way to the stage at the Elbphilharmonie concert hall and then onto the conductor’s podium, where they proceeded to glue their hands to the stand using a fast-setting glue. The duo was a man and a woman, both wearing fluorescent vests. The crowd seated in the audience groaned while the pair applied the glue to their hands.

The woman made a brief speech to the audience about the importance of climate change and the dangers the port city would face if no steps were taken, leading to the city becoming submerged beneath the water. The female activist said, “If we do nothing now, we will be complicit in the greatest catastrophe humanity has ever suffered.”

“Just as there is only one Beethoven violin concerto, we only have this one planet, whose boundaries we’re abusing so badly that catastrophes caused by climate change are getting more frequent and deadly."

She added, “I always wanted to have children, but now I’m so afraid to place a child in this world and look on as it dies in a war over resources or water."

The extremists have previously taken drastic steps to get the attention of the public by vandalizing cars. According to The Sunday Times, the radical campaigners have had members throw substances on priceless paintings by Klimt and Monet.

Law enforcement representatives entered the concert hall and promptly removed and arrested the two extremists, and the show continued without further incident.