Making America Weak Again: Libtard Governor "All In" For Biden 2024, Won't Challenge Him For Presidency 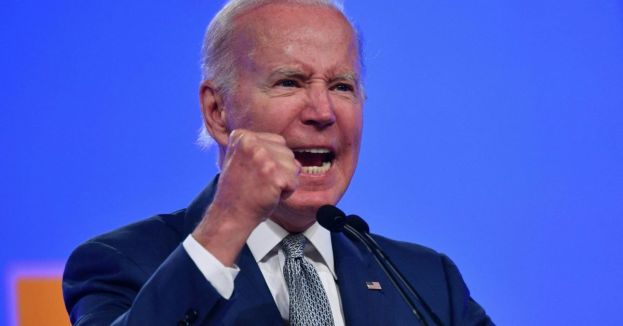 This is after much speculation that the California governor might go for it.

Speaking with Politico, Newsom sought to throw a cold blanket on the idea that he might run in 2024. He stated that there is irritation within the White House about the speculation that Newsom could try to take the nomination in 2024. Plenty of speculation had been building that he was someone who might step up and take on the role of Democrat torchbearer for his party, but that doesn't seem to be the case.

"I've told everyone in the White House, from the chief of staff to the first lady."

He was speaking about conversations he has had with the White House to indicate that he is all-in for President Biden's re-election bid in 2024 if he chooses to make it.

Months ago, Newsom began to get speculation around his name that he might be a candidate for 2024 after he paid for advertisements to run in Florida attacking Florida Governor Ron DeSantis. Additionally, many Democrats worried about Biden's advanced age and health. They were and are still concerned that he might not be healthy enough to attempt to run a campaign.

On top of that, Democrats have to worry about the record high inflation, the surging crime rate, and the total lack of immigration control at the southern border. All of those things contribute to the fact that Biden remains unpopular with the American people, and it doesn't seem likely that this will change anytime soon. Biden and those around him might be concerned that he would lose in a matchup against a Republican candidate.

Democrats smell blood in the water, which seems to be why speculation has surrounded many candidates for office. Newsom is just the latest to get this treatment. There are others whose names have been tossed around as well.

The fact that Newsom is shutting it down as quickly as he is might indicate that he doesn't necessarily think he has any real shot at becoming the nominee in the first place. Whatever the reason, this story mostly shuts the door on any potential for Newsom to get involved in the 2024 race. He could walk it all back, but it would be challenging.