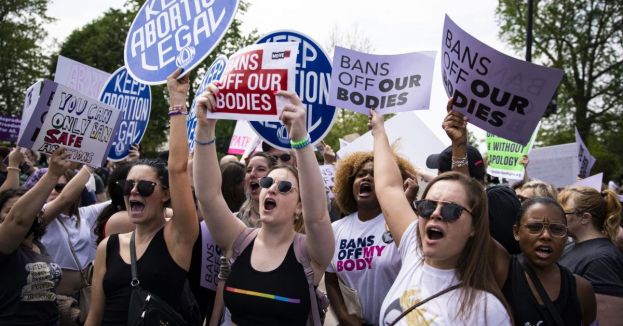 For more people, Thanksgiving is a time to gather with family and friends to overeat turkey and then pass out in front of the TV while trying to watch the big game.

When asked what they are thankful for, most people will say the love of family and friends, having a roof over their heads, or, in America, living in the greatest country in the world.

However, as Fox News reported, the Nation, a far-left magazine, interviewed several women who were thankful for something else entirely.

“As Americans gathered around the dinner table with loved ones this Thanksgiving, one liberal magazine shared stories from women who say they are thankful for having had abortions.

“The Nation published Thursday morning’s article titled ‘We’re Thankful for our Abortions.’ In it, writer Nikiya Natale interviews women who say having had an abortion (in some cases more than one) has given them opportunities in life they wouldn’t have otherwise had.”

What about the idea that many pro-choice people believe that abortion, while necessary from their point of view, is something to be regretted? Natale had a ready-made answer.

“The writer counters those who say they are pro-choice, but that abortions are not to be celebrating, insisting she is thankful ‘for both of my abortions.’ She says her abortions have allowed her to plan for a pregnancy and have a child on her own terms.”

The women interviewed in the article seemed happy that not having to bring their babies to term allowed them many employment opportunities. The option of putting the child up for adoption did not occur to them. No one seemed to ask, did these women who are celebrating their abortion use birth control, and if not, why not?

According to Breitbart, the author of the article did not have any use for Thanksgiving as a holiday.

“Calling Thanksgiving a ‘complicated’ holiday, the author questions why the country bothers celebrating it.

“’ This year I find myself reflecting not only on all the people I love and cherish but also on the outcomes and impact of the midterm elections, and on why our nation celebrates the complicated holiday of Thanksgiving at all,’ she writes.

“Natale then slams the national festivity, which she describes as ‘founded on the unforgivable genocide of Native Americans.’

“As a result of her commitment to justice for all people,’ celebrating that which she is most thankful for, she claims, is a ‘difficult’ thing.

“’ [T]he harsh reality is that the utter disregard for all Indigenous people in the 1800s fuels the same systems of white supremacy that dehumanize all of us today,’ she charged.”

It should be noted that the first Thanksgiving was once an instance when European settlers and Native Americans sat down to feast in harmony and fellowship. Neither, one thinks, would have imagined that abortion would be something to be thankful for.