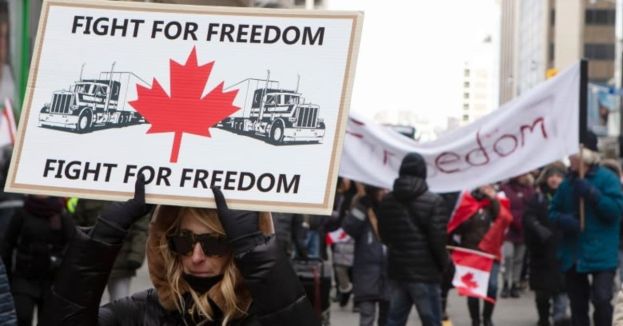 New shocking reports from Breitbart state that leadership in Canada spoke about the potential to use the Canadian army to try to handle freedom protestors last year.

Text exchanges between Justice Minister David Lametti and Public Safety Minister Marco Mendicino show that the two discussed the possibility of using the military to try to shut down some freedom protests throughout the country.

Breitbart reports that the messages between the two stated the following:

“you need to get the police to move. And the CAF [Canadian Armed Forces] if necessary. Too many people are being seriously adversely impacted by what is an occupation. I am getting out as soon as I can.”

It is undoubtedly the case that conversations were happening at some very high levels between top Canadian officials about possibly using the military to quell protests that they disagreed with.

The protests that the top leadership was so upset by were truckers who were protesting COVID vaccine mandates throughout the country. They insisted that mandates caused shortages in the trucking industry and that drivers wanted the freedom to make medical decisions.

Some of those caught up in the text messages saw that they made some wrong attempts at humor within their messages. Many people are not buying that argument at all. They say that it is clear that the messages were to be taken literally, and that is something that should be troubling to everyone in Canada and beyond.

The fact that any government anywhere in the world feels that it has the authority to bring out the military to try to enforce the will of the people to its ends is disturbing by itself. The fact that a democratic government like Canada might do so is even more disturbing.

Prime Minister Trudeau enacted the Emergencies Act for the first time in Canadian history. He made that declaration on February 14, 2022. Now, there are active investigations over the validity of having made that declaration when it was made. Canadian Security Intelligence Service (CSIS) Director David Vigneault stated that while he agrees with the declaration of the Emergencies Act, he does not feel that there is a legitimate threat to the public in Canada.