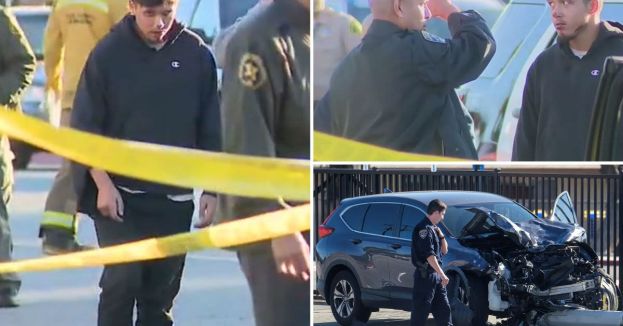 A driver who injured and nearly killed as many as 20 police recruits have been released after his initial release.

The suspect, Nicholas Joseph Gutierrez, was released because California law forbids suspects from being held for more than 48 hours without their charges being presented by a prosecutor to a judge.

A LA County Sheriff's Department spokesperson stated that Gutierrez would be rearrested once the probe into the incident is completed. That should occur by Wednesday of this coming week at the latest. The spokesperson continued by saying they have the necessary evidence against the suspect but want to ensure it is correctly presented to a jury. No one can blame them for taking extra caution to ensure they get this one just right.

Authorities say they allegedly found weed in Gutierrez's car and are attempting to determine if the suspect was high when he committed this alleged crime.

A Breathalyzer test was administered to Gutierrez at the scene of the incident, and he passed the test with a score of 0.0% BAC. This means that there was no alcohol detectable in his bloodstream when he was tested.

The allegation is that Gutierrez left bodies strewn everywhere after running his vehicle through a group of around 75 police recruits who were out on a morning jog as part of their training. This was near the STARS Center Academy in South Whittier, and approximately 20 of those recruits were injured in the incident, some nearly fatally.

Seven of these officers remain in the hospital as of this writing. Two of those seven are said to be in critical condition. Gutierrez allegedly still had his foot on the accelerator when he crashed through the group of recruits and ran his car into a light pole. Those who witnessed the incident believe that Gutierrez was traveling between 30 and 40 miles per hour when he made contact with the recruits.

Investigators say that they have developed probable cause and believe that the actions taken by Gutierrez were intentional. They did not release further details about the nature of the probable cause or why they believe that Gutierrez took these actions on purpose. All they could say at this time was that they had reasons to suspect that this was done on purpose. More details will likely emerge at trial.