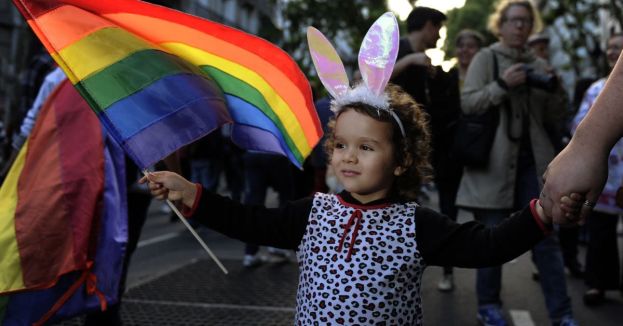 The radical left is far from done targeting our children with LGBTQ propaganda.

In the latest news, a Maryland School District targets the school’s youngest and most easily influenced students.

The Blaze reports, “Fox News Digital reported that a Montgomery County Public Schools PowerPoint presentation made several references to a set of activist books designed to teach diversity to students that will be given to classrooms up to fifth grade.”

“The books chosen for distribution seek to undermine the concept of a gender binary at a young age. The books immerse students in the vernacular of LGBT activists and include teaching toddlers and other children words like ‘drag queen’ and ‘intersex.’”

Books will include things like Pride Puppy, about a puppy celebrating Pride Day. Kindergartners will read a book about a gay wedding, and then the books that involve ignoring that a person has sex come on board.

The Blaze states, “After a few years, kids in the MCPS District will be ready for “Born Ready: The True Story of a Boy Named Penelope.” This reading material is all about the black transsexual son of an activist.”

Not only is the District making sure that children have access to books, but they also include as much propaganda as possible in the curriculum. According to The Blaze, “Accordingly, instructors are encouraged to provide toddlers with activist-approved definitions for words such as “non-binary”; “gender expression;” transgender”; “pansexual”; and “cisgender.’”

The presentation also includes answers to questions that children and caregivers may have. When parents or caregivers ask about opting out of the lessons, teachers are instructed to explain that the lessons are inclusive and not about anatomy.

According to Fox News, the sample answer is, “During Family Health & Life, we are learning about scientific topics like biology, anatomy,reproduction and puberty,” says the sample response.

“In these picture books and through classroom discussions, students will learn about the diversity of identities in the world and our classroom; we are not getting into any scientific specifics. This is similar to when we learn about different races, ethnicities, and religions, and other social identities commonly discussed in school. All children and their families deserve to be positively represented in our school and community.”

This is the same response that should be given to parents concerned about their toddlers learning what transgender is.

One way or another, they continue to shove transgender ideology down our children’s throats, and it needs to stop.