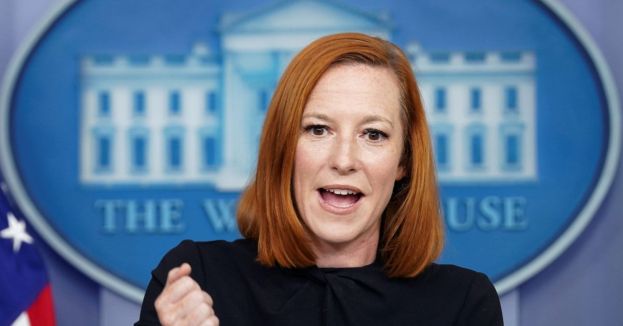 Former White House press secretary Jen Psaki is trying her best to deflect away from the advanced age of President Biden.

Many are concerned about his age and mental capacity at this stage. However, Psaki tried to counter that by calling Donald Trump old. For the record, Donald Trump is a few years younger than Joe Biden.

Biden is already the oldest President in American history and will be 82 years old on Inauguration Day 2025. Biden continues to insist that he intends to run for re-election despite the concerns of many people within his party.

"Just throwing out there. For everyone who argues that @POTUS shouldn't run again because of his age…you know Donald Trump is 76, right?"

When Trump took office in 2017, he was the oldest person to have assumed office. He was not the oldest person to be in the White House. That honor belonged to Ronald Reagan, who was 77 when he left office after eight years. However, Biden was even older than Reagan when he left office, and Biden is showing signs of mental decline in many people's eyes. They see him struggling to string sentences together at times or to take directions onto or off a stage.

A New York Times/Siena poll conducted amongst only Democrats found that 64% of the President's party preferred a candidate other than Biden to take a stab at running for President in 2024. That doesn't make it seem like the President has even the confidence of his party.

In October, Biden spoke with MSNBC's Jonathan Capehart and stated that questions about his age are "totally legitimate." However, he insists that he is moving forward with a re-election campaign.

He has yet to announce his candidacy for President in 2024 officially, and it is still possible that he could back out of running as time draws nearer. That is within the realm of possibilities for him at this time. However, if he proceeds with a plan to run, he could face several questions about his health and stamina to handle a campaign.

Biden insists that he still has the energy he needs to be President, and he says that he understands why people question his abilities, but he feels that those who see him in action understand that he can still do the job.